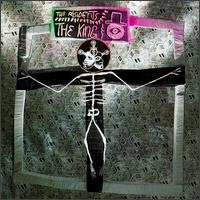 I have a theory. And it is mine. It may not be original, but it is mine.

Time is not linear. Yes, a lot of people have said that. My own vision of how time and reality works is that instead of linear, time is a spiral. A long, jangly, springy, spinning spiral that looks pretty much like a giant Slinky.

Sometimes it collapses, sometimes it expands. Sometimes it gets tangled up in itself. There are an infinity of such reality-Slinkies spinning and banging into each other in the Grand Nothingness that is The All. Sometimes friction works up between two or more spirals, and for lack of a better analogy, in much the same way that a spark of lightning bridges the gap between differing potentials of earth and sky, or between your hand and the doorknob, there is occasionally a blast of reality-potential that shoots across the gap between Slinkies and balances the potentials of causation on one side and reaction on the other.

I think that somewhere out there, there was one such Slinky in which another Elvis was hit by such a bolt of reality-potential and for one utterly clear and incredibly brief moment, saw what he might become. This Elvis recorded "That's All Right," then decided the cost was too high, went back to driving a truck, and became an ultimately obscure and all-but-unknown footnote in the history of popular music. The consequences of this decision means that somewhere out there, there is a reality-Slinky where Lisa Marie was never born, Priscilla Wagner was one of the original Charlie's Angels, "Blue Suede Shoes" was a minor hit for both Carl Perkins and Johnny Cash, and Michael Jackson still has most of his original nose.

It also means that in that particular Slinky, rock & roll is very, very different.

Of course, all of this conjecture is irrelevant, because the fact is that Elvis Presley had an impact on our own reality-Slinky that is still sending wiggles and tremors throughout time, beyond our own relative point and into the future. I must admit this, and I'm not a fan. I still think "That's All Right" was his best song, and most of his career was largely gratuitous and redundant.

But in this case, it doesn't matter what I think, because the masses and history have spoken.

The Residents' The King and Eye is a collection of Elvis hits, but they are not cover versions. They are reinterpretations. If you are an Elvis fan, you might want to stay far, far away from this album. However, if you are not especially a fan, but perhaps especially if you are more interested in the Elvis Phenomenon than in the music or the person, you would probably find this collection enlightening. The album consists of 16 of Elvis' hits, interspersed with spoken-word bits of narrative in which the vocalist explores the phenomenon of Elvis.

Upon my first listen, many years ago now, I was immediately struck by how desperate and masochistic many of these lyrics are--something I had never noticed in the bouncy, up-tempo, polished versions which we are all used to hearing. It is almost certain that once you listen to this album, there will be at least one or two songs which you will never hear quite the same way again.

So yes, I recommend this album, partly because of the fascinating way Elvis hits are interpreted, and partly because it is probably one of The Residents' least avant-garde and most accessible albums. It might make a good starting point for a Residents newbie.

Amazon has sound samples of the first four tracks: "Blue Suede Shoes," "The Baby King, pt. 1" (narrative), "Don't Be Cruel" and "Heartbreak Hotel." This item is no longer manufactured, and new copies will cost some money, but used ones can be found at an affordable price. They also have it available as an mp3 download.