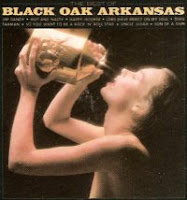 This is one of those times that I wish I could find my old Rolling Stone Record Guide, because I know it was the scathing two-liner of a “review” in that book that made me buy this tape out of sheer morbid curiosity.

The group, originally called "The Knowbody Else", was formed in 1965 in Black Oak, Arkansas, by Jim "Dandy" Mangrum (vocals), Rickie Reynolds (guitar), Stanley Knight (guitar), Harvey Jett (guitar), Pat Daugherty (bass), and Wayne Evans (drums). Their first PA system was stolen from a local high school. Members of the group were subsequently charged in absentia with grand larceny and sentenced to 26 years at the Tucker Prison Farm (this sentence was later suspended). This led to their retreat to the hills of rural northeast Arkansas where they lived off the land and refined their musical style. Some of their influences during this time were The Beatles and The Byrds.

The Knowbody Else moved to Memphis, Tennessee in 1969 and signed a record deal with Stax Records. Their self-titled debut album, and their only album with Stax, was largely ignored by the populace. During this time the band became interested in psychedelia and Eastern spiritualism which, combined with their Southern Baptist upbringing, contributed to their sound.

You have got to be kidding. I don’t know if this is serious or satire. “Refined their musical style…”? Eastern spritualism? "Ignored by the populace"? (Who writes like that?) I hardly know how or where to begin.

The fact that Black Oak Arkansas, and particularly the lead (cough) “singer” Jim “Dandy” Mangrum got a record deal and released enough albums to eventually hack together a “best of” compilation is strong evidence that there is something fundamentally wrong; not only with the music industry, but with the universe as a whole and the nature of reality itself.

The band are not bad. I said irredeemable; perhaps I was too hasty. Their rendition of “Dixie” is probably the best thing on the album, but only because Mangrum (ahem) “sings” only at the beginning (with a lot of help from what sounds like a real chorus), and the rest of the 3 1/2 minute piece is instrumental rock that riffs on the the theme of “Dixie.”

Mangrum--for lack of a better descriptive--"sings" like someone who lost the audition for Dr. Teeth and the Electric Mayhem, and he is obsessed with himself, having titled one song after himself and mentioning himself in others. His attempt at profundity (“Lord Have Mercy On My Soul”) sounds like it was written by a pretentious but untalented 7th-grader. His rendition of the Beatles’ “Taxman” should make any real Beatles fans want to roll up their sleeves and begin slitting throats (or at least, his throat). Note: I am not a real Beatles fan, but even I see visions of blood and fire.

Nine tracks. Playing time, a mercifully brief 30 minutes. Although written up glowingly on Wikipedia, I assume by someone who was a member of the band or related to them, they left not even one song for classic rock radio to remember them by. Even Ram Jam and Mountain did at least that much.

No links this time. You’re on your own. Now that I have ripped this tape, listened to it and written about it, I am going to delete all the files (except maybe the last two minutes of “Dixie”), and use the cassette for a shotgun target.
Posted by AlanDP at 8:05 PM