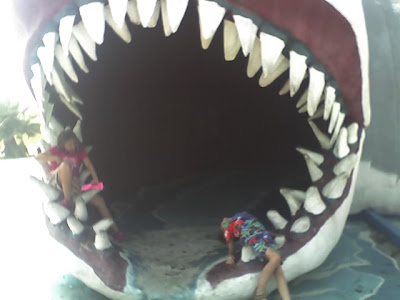 I never announce these things before hand, because I think using a blog to announce that one will be away from home for several days is somewhat foolish, but we took a trip to Port Aransas over the weekend. This is a big shark's mouth outside the entrance to one of the tourist traps. I took quite a few pix with a real camera (film and everything!), but I also took a few with the cell phone so I'd have something to post as soon as we got back. Above are the kids, daughter just sitting there, son posing as a bit of meat caught between the teeth.

We hit both the State Aquarium and the Lexington this time, third visit to the aquarium for my wife and I, second for the kids. Second trip to the Lexington for my wife and I, first time for the kids. My son pronounced the Lexington "awesome." They've added a lot to the ship since we visited it the first time in 1993 or '4; we caught the film about the fighter pilot this time and it was pretty cool. The model ship just below was made completely out of brass, it was quite impressive. Looks like I managed to catch the sign on the wall too, so we can see it is supposed to be the U.S.S. Texas. 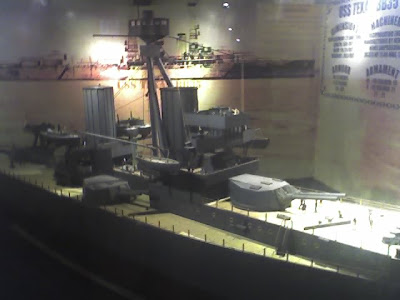 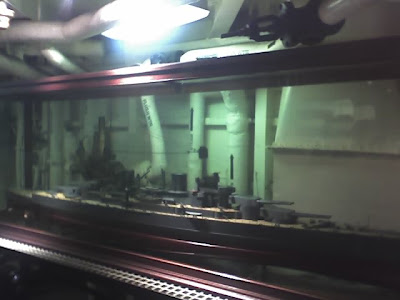 The model immediately above was wood, but I don't remember the name of it.

We ran into brief, scattered showers on the way back, beginning about Sinton, and saw either showers or evidence of recent rain all the way home. It was a nice trip back.

We hit the beach a couple of times, too, but I really only did that for the kids. The beach doesn't really excite me very much anymore. I saw something that I considered fairly close to stupid (although that is not uncommon). Sunday evening at the beach, a bunch of fish started jumping out of the water about 100 yards from shore. Everybody started running out there so they could stand where all the fish were jumping. I told my family, "There may be a very good reason for those fish to be jumping like that. Something might be chasing them." Anyway the beach was in very good shape this time. Sometimes it's full of seaweed, but this time even the free beach was really clean.

Oh yeah, we also caught the fireworks show on Saturday night. I always enjoy that.

P.S. For the out-of-staters: the aquarium and the Lexington are in Corpus Christi, not Port Aransas, but we have a free place to stay in Port A and it's a short drive to all the good stuff in Corpus.
Posted by AlanDP at 3:58 PM