I recorded that show on the History Channel last night about the Beast of Gévaudan--a beast considered a werewolf during the 1760s. During 1764-67, more than 100 women and children were brutally killed by this "beast," and some of them were also sexually violated. I hadn't heard about this incident before so I was quite interested in it.

The two guys on this show were some alleged cryptozoologist from San Antonio and a police profiler from somewhere else.

My first complaint: their conversations were obviously scripted. Either that, or they both have the most monotonous and un-modulated voices I have ever heard.

But the big complaint, and the one which made me turn it off and give up before even the 30-minute mark, was a blatant lie.

The so-called crypto guy was trying to show the police guy that some odd creatures may be out there, so he used some search engine (not Google) to hunt down the Cuero "chupacabra." He gave the police guy a brief synopsis of the case, and then said something like, "scientists still have not been able to determine what it was." 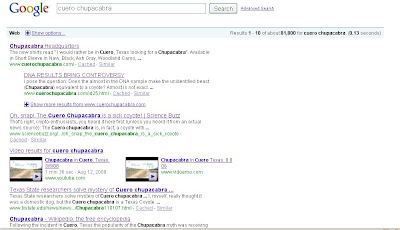 As usual, click to enlarge. You will see exactly what I saw on the very first page of search hits for "cuero chupacabra." You don't even have to click to see that it has been determined that the creature was a coyote. Furthermore, if you go to that first link (and follow it to the second link), you will find that the woman herself who first found the coyote admits to the validity of the DNA tests which show that it was a coyote that also had some Mexican wolf ancestry.

So...if you missed it, you didn't miss it. The utter blatancy of that one lie puts the whole show down the toilet as far as I'm concerned.

I do want to hunt down a book about the Beast of Gévaudan, though. It still sounds like a very strange and compelling case of mass murder.
Posted by AlanDP at 7:09 PM