I know it has been a little slower even than usual around here lately, but that's because I have not been feeling entirely well and I have been medicating myself and hitting the sack earlier than usual most days this week. Also the holiday season coupled with Boy Scout and Girl Scout activities--and my daughter being in the school choir--has made life a little more hectic than I prefer. Sigh...and the choir concert is Monday night, scout meetings again Tuesday night...but then the rest of the week should go back to normal, except for Christmas shopping. Argh. 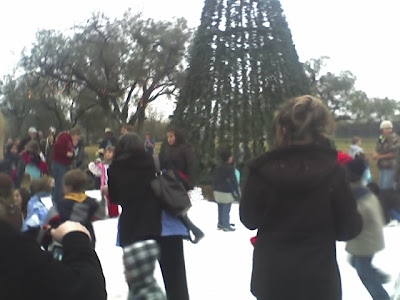 Tonight was the annual tree lighting at the city park. Although they announced several times to "stay off the snow" until the tree was lit, did they really expect to dump several tons of fake snow around the tree and not have it result in utter chaos?

The scouts raised the flags, led everyone in the Pledge of Allegiance, and sang some carols. The high school band played some carols. Some praise band from one of the local churches did a bunch of pop-carols that were completely uninteresting. 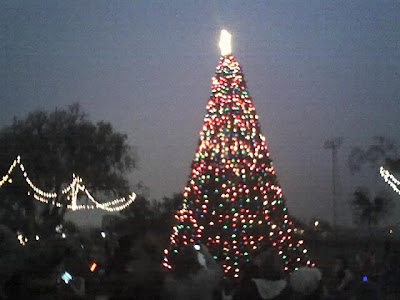 And then the misting rain started, which I was expecting and dreading because I'm usually outside in that kind of weather only when I'm getting paid to do it. So we came home and had hot soup for supper, and the tree-lighting ordeal is over with for another year.
Posted by AlanDP at 8:49 PM