I seem to have fallen to the same malady as El Capitan. Oh, I still check into plenty of other's blogs regularly to see what's going on, and I still read a lot of the same blogs that I count on for real news (as opposed to the MSM version). I gave up on just linking to good posts a long time ago, for the most part, and not having anything much original to say here, I decided there wasn't much point in wasting time on it.

So I'm not really quitting, but this blog probably will only be used for the occasional "I'm still around" post, like this one, and for the rare interesting or weird bit of stuff that happens to me in real life.

I had written a Christmas-themed post for The Hunter Chronicles but then decided to put off posting it until I had worked on it more, and got a little stuck on it. I'm going to try to write something before a whole year passes since the last post, but I'm going to save the Christmas post for later. The main character has continued to evolve in my mind, however, and I think there will be a new revelation or two before too long.

I have not actually stopped blogging. I have just turned to different pursuits. For example, I spent about 4 hours yesterday writing a post about "Amazing Grace" for The Hymnomicon (check the right sidebar for all other blog links). The Hymnomicon is primarily for the interest of the majority of my FB friends who are members of the same church as I am and who I all actually know in real life. But of course it's still a public blog and open to anyone who wants to visit. 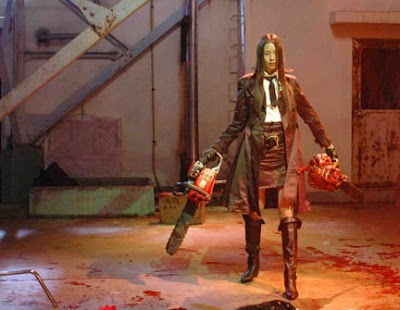 I don't remember why I did it, but some time ago I had added Tokyo Gore Police to my Netflix queue and I watched it this past week. A very intricate plot, with many unexpected twists and turns and a completely surprise ending, but not nearly enough gore. Also the sexual symbolism was tastefully understated and not at all gratuitous.* BTW, if you feel the need to G00gl3 some images from this movie, be warned that the one above is just about the only one that even comes close to being SFW.

Also caught that new live-action version of Blood: The Last Vampire this week and I think the original anime was much better.**

*irony: the use of words to convey a meaning that is the opposite of its literal meaning