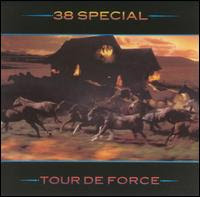 This is the only album I have from 38 Special. I used to be a pretty big Skynyrd fan, but this group was, to me, another "radio group"* and not much else. That is, until I heard "If I'd Been the One."

If I had to pick One Song that pretty much defined the 80s for me, it would be this song. It's still a song that totally hits me in the gut and it gets a big 5 on my personal ratings scale, which is as high as it can get.

I'm pretty sure I got this record with one of those introductory "12-records-for-a-penny" offers from Columbia Record Club. Five out of the nine songs get a rating that will put them on my general favorites list: "If I'd Been the One," "Back Where You Belong," "One Time for Old Times," "See Me In Your Eyes" and "One of the Lonely Ones." Overall I give the album a 2.6. There's a couple of songs that I could throw away.

The sound quality that I finally ended up with is not perfect, although there are no obvious pops. There are a couple of dull noises that are buried so far down I can't dig them out and when I listen to it at my usual listening volume level I can't hear them, so it's good enough to commit to a CD sometime.

*A group that I enjoyed hearing on the radio but never went so far as to buy their albums.
Posted by AlanDP at 6:38 PM