Come on down and meet your maker

I got rained only a little today; we had a very easy route and I finished early, picked the kids up from Grandpa's house where they were making sour milk sugar cookies from an old family recipe (had a few--don't let the "sour milk" part throw you--they're awesome), had a long nap, watched some 'Allo 'Allo from the latest Netflix DVD, and am now listening to a new addition to my CD collection. 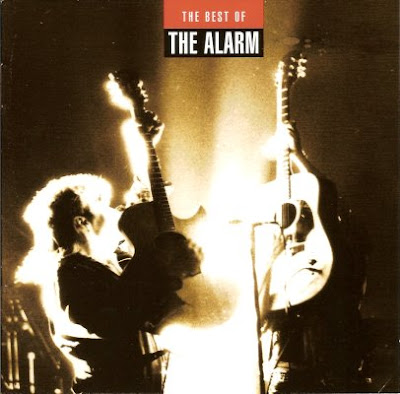 So today has been an above-average day.

Back in the 80s when I was a pizza delivery guy, a co-worker and fellow driver had their Declaration CD which I thought was awesome. He loaned it to me and as was my wont, I taped it and eventually wore the tape out. Went looking for it somewhere and couldn't find it, but I did find their Electric Folklore Live which I bought since it had a couple of the Declaration songs on it. I still wanted a really good collection of their stuff and when I saw this at yourmusic.com I put it in the queue.

My only gripe with it is that it has the single versions of pretty much all the songs on it. The album versions were often longer. But I guess if they had used the album versions they couldn't have put as many songs on it. 21 songs in all for a total playing time of 76 minutes, so they packed this one as full as it would go. I never understood why these guys weren't more famous than they were. They were often compared to U2, but personally I'd rather listen to The Alarm than U2 any day.

I might still have to download certain album-length tracks from Amazon just to have the full versions. But this one is still a great example of 80s music that did not suck.

And here's some unrelated music humor from Not Always Right.
Posted by AlanDP at 6:56 PM