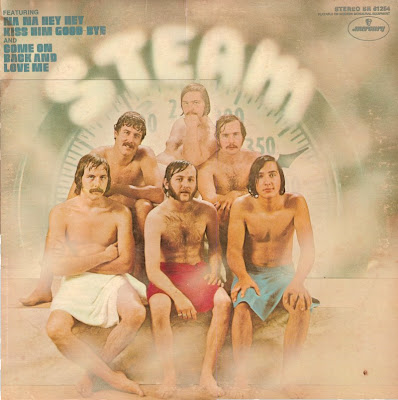 click to enlarge (if you dare)
Today I went through the shelves and grabbed a few of what to my perceptions are "odd," "strange," or perhaps even...but no, I don't think I quite have anything "bizarre" that I know of. These records were selected not for the music on them, but for the strangeness of the cover art. I thought I'd go ahead and just get this one out of the way. Note: This is something from my late mother-in-law's collection.

Steam was a pop-rock music group best known for the 1969 number one hit song and perennial favorite "Na Na Hey Hey Kiss Him Goodbye." The song was written and recorded by studio musicians Garrett DeCarlo, Dale Frashuer, and producer/writer Paul Leka at Mercury Records studios in New York City. The single was attributed to the band "Steam" although at the time there was actually no band with that name. Paul Leka and the studio group recorded the first album.

So, if you've ever been afflicted with that song and I'm pretty sure at one time or another you have, this is where it came from. I found this passage from the above link particularly amusing:

To make the song less palatable to DJ's, they lengthened the song with a repetitive chorus of "na na na na, na na na na, hey hey, goodbye". Nobody believed that Na Na was worth anything and since neither Leka or DeCarlo wanted to have their names on it, the song was attributed to a non-existent band that they named Steam.

And they used this song for a throw-away B-side. But even though they intentionally tried to make the song even worse, some DJ decided to flip it over and play the B-side, requests for it came pouring in, Mercury noticed it was getting airplay and spent $50,000 to buy 100,000 copies of their own single to make sure it went onto the Billboard charts, and...

By the beginning of the 21st century, sales of "Na Na Hey Hey Kiss Him Goodbye" had exceeded 6.5 million records.

I've listened to side 1 and the rest of the songs on that side are the same kind of bland early-70s bubblegum pop. The last song on side 1, "Love and Affection," even throws in an occasional "na na na na" to echo the hit song that begins the side.

I hope you'll allow me the luxury of not listening to side 2.
Posted by AlanDP at 6:46 PM