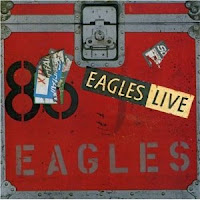 time ago I had bought a cassette repair kit, for splicing broken cassette tapes. I don't have it anymore, unfortunately. Today I was going to rip a single song, "Seven Bridges Road" from my old Eagles Live tape, and it broke as I was rewinding it back to the beginning of side 2 where the song is. I tried repairing it, but it was too much for me. So this one gets crossed off the list. I really only wanted two songs from it, the one mentioned and "Life's Been Good." The rest of it I can do without; I have all those songs on studio albums and the live versions don't do anything extra for me. So I guess I'll have to add "Seven Bridges Road" to my list of singles to download.

Anyway, this came up because back in the late 80s-early 90s there used to be a program on KZEP on Sunday mornings called The Tumbleweed Connection. I don't remember the name of the guy who hosted and programmed it, but it was two hours of Americana music (more or less) and I really enjoyed it. I would tape it every Sunday and then listen to the tape two or three times during the week at work, driving back and forth, etc. Occasionally he would play a song that I especially liked so I would record it again to a keeper tape and I eventually had 3 or 4 tapes full of these songs. Unfortunately all these tapes are gone now, and the notes I had made for them (artist, song title, etc.) are also not to be found. But I remembered a version of "Seven Bridges Road" that was not by the Eagles and which I thought was a much better version. I remembered this song, for some reason, earlier this week and spent a little time researching cover versions until I figured out that the one I was looking for was by Ian Matthews, which I downloaded yesterday.

Like I said, I think it's a better version. It's slightly slower and much "spacier" and has a certain haunting quality. And although on their live album they credit Steve Young, the writer of the song, with teaching it to them, the Eagles' version is obviously a copy of Matthews' version. It's from his 1973 album Valley Hi. I think I'll have to get this full album pretty soon.