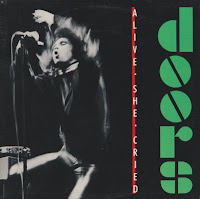 Of course as any self-respecting Doors fan I have some albums of theirs that overlap. This isn't one of them. When I bought this, I already had their "official" live album Absolutely Live on LP (and recently bought the CD re-release which has a couple more songs on it). This is another live album that was made from some lost tapes. The story of the tapes is in the liner notes on the inner sleeve. What it boils down to is that some live recordings were made and then lost sometime in the 70s. A song that the surviving Doors knew was on those lost tapes was heard on a European TV show a few years later and they set about to try and find those missing tapes. They finally tracked them down in a warehouse that was being used to store a bunch of stuff; these tapes had been put in that warehouse but never cataloged--just a box sitting there and no one knew what was in it.

So this album was made from those tapes and they made sure not to include anything that was already on Absolutely Live. It's hard to believe they didn't have a live version of "Light My Fire"* on that album, but they didn't, so there's one on this album.

Gloria -- This is the one by Van Morrison. They played it a lot in concert but never put it on an album. The interesting thing about this track is that it was recorded during a sound check before a concert, so it's essentially a live track without any audience noise.

Light My Fire -- Already mentioned. This version is a couple minutes longer than the studio version from their first album.

You Make Me Real

Texas Radio & the Big Beat -- A shorter version that was recorded still in the working-up stage before it was committed to an official album.

Little Red Rooster -- A blues number that was not on any other album. This one also has John Sebastian (of The Lovin' Spoonful) on harmonica. He can really make that harmonica burn.

Moonlight Drive -- Robby Krieger's guitar on this one is really amazing. Longer than the studio version because it incorporates the poem "Horse Latitudes" within it. But really, Morrison could have just stood aside and let Krieger riff on this one the whole time.

This album is no longer available on any medium (except used or collectible), but all the songs on it were later included on The Doors In Concert.

Not a perfect rip, but very close.

*I heard one of those call-in shows back in the 80s with the three surviving Doors. Someone asked Robby Krieger if it bothered him that most people thought Jim Morrison had written this song instead of him. He said, "No...as long as they don't think José Feliciano wrote it."
Posted by AlanDP at 7:29 PM