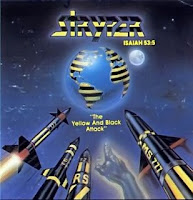 This is one of my two Stryper albums. This was their first album, although only a shorter EP-length record with six tracks (total playing time about 24 minutes). It was later re-released after the success of their second album, Soldiers Under Command. The re-release had two extra tracks that were not on the original.

The original was released by Enigma Records, which as I have said before was a label that I always kept an eye out for. They didn't think Stryper was going to be very successful so less than 20,000 copies of the original were printed. My record is one of that limited run, which surprised me.

I never have been impressed by bands who have to incorporate the length of their hair and their ridiculous costumes into a description of their music's genre, but Stryper was different, being a Christian metal (of sorts) band and it was nice to hear that kind of music with positive, upbeat lyrics for a change.

Stryper is one of the very few bands who I have actually seen in concert. I have never been a fan of going to concerts; all those strangers crammed into such a relative small space gives me the creeps. But a friend and co-worker of mine back then wanted to see them when they came to San Antonio, and he wanted someone to go with him, so I bought a ticket and went. It was a decent concert, except the opening band (Heaven) completely sucked, and were just about the exact opposite kind of band that Stryper fans were going to enjoy or even tolerate. Their was an audible collective sigh of relief when they finally left the stage. Somebody somewhere really screwed up when they put those two bands together, most likely just thinking that since their name was "Heaven" they must be a Christian band too. Guess again.

Anyway this is perfectly good glam metal but I wasn't a big enough fan to stick with them for long because overall that kind of music generally isn't my thing. I got a pretty good rip on this except for one song that has a soft scratchy sort of sound at one point, but it's hardly noticeable unless I'm really paying attention. 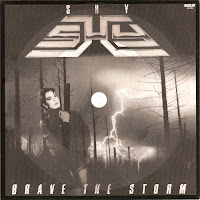 Enclosed in the jacket there was also this promotional thing. The "record" part is transparent plastic, mounted against a cardboard backing which also supplies the graphic. It has a brief blurb by a member of the band (Shy) with brief excerpts from three tracks from their debut album Brave the Storm.
Posted by AlanDP at 7:58 PM