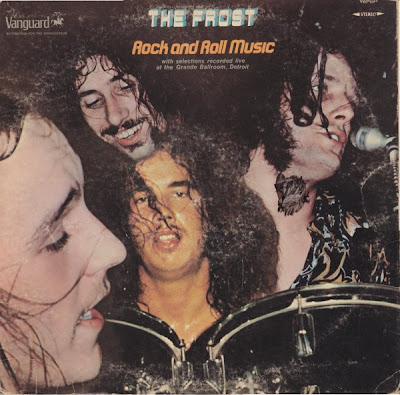 There is a very brief stub article at Wikipedia on this band. I think one sentence bears repeating here:

The Frost were one of the top Detroit area bands of the era, however very poor album cover artwork, distribution and promotion by Vanguard hampered the band and caused them to miss the national success that other Detroit bands like Bob Seger and Grand Funk Railroad were to achieve.

Yeah, "very poor album cover artwork." I think this graphic can attest to the accuracy of that statement. The back and inside artwork is no better.

As for the music, I like it. It's just good solid rock & roll with occasional harmony vocals. The personnel were: Dick Wagner (lead guitar, vocals); Don Hartman (rhythm guitar, harmonica, vocals); Gordy Garris (bass, vocals); Bob Rigg (drums). Wagner went on to work with a great many other famous rock stars later on.

Some of the tracks are studio recordings, while others were recorded live. The album has 7 tracks, 6 of which are original to the group, closing with a live cover of "We Got to Get Out of This Place," which had been a big hit for The Animals.

The record is old and badly used, and I don't think I'm going to go to the trouble of trying to edit out all the pops, but I'm going to go ahead and keep it in the main archive because it's not half bad.

UPDATE: I did do some editing to get rid of the worst of the noise, but I wasn't nearly as persnickety about it as I usually am.

P.S. "Persnickety" is in Firefox's spelling dictionary? And Cthulhu isn't? WTF?
Posted by AlanDP at 2:15 PM