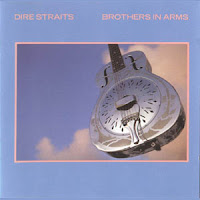 This is the only Dire Straits album I have, and I remember exactly why I bought it. I was cleaning up the Mr. Gatti's late one night in 1985, and as was our usual wont, we had put MTV on the big screen TV. The haunting strains of the the beginning of the title track came on and I turned off the vacuum cleaner and stood there perfectly still and silently watched and listened to the whole video. The next day I went to Hastings and bought the record.

There is not a bad track on this album. It's just as solid an album as you could ever hope for and it's one of the all-time greatest rock albums, in my opinion. My favorite track of them all is still "Brothers in Arms," but this is one album that is always worth listening to in full.

Another reason I like it is because Mark Knopfler's rather limited vocal range makes it easy for me to sing along. But that's only a minor perq.

Pretty much perfect rip, and it'll go on an audio CD as well as into the big mp3 archive.
Posted by AlanDP at 8:21 PM