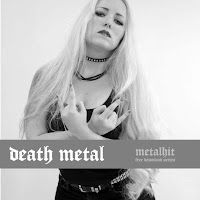 As I said before, I knew I wouldn't enjoy listening to some of this series, and this is one of them. I still downloaded it because all the intricate variations of the metal genre interest me.

Like all the other Metalhit samplers thus far, this collection focuses mostly on outside-the-U.S. bands; only one band from the U.S., the others being mostly from Europe, with a few from Russia, Mexico, and South America. Several of them are listed at Encyclopedia Metallum as "technical death metal," which is defined at Wikipedia thus: "a musical subgenre of death metal that focuses on complex rhythms, riffs and song structures." Further: "Phil Freeman, ex-editor of Metal Edge, has described the sub-genre of technical death metal as 'the hidden side of its genre, having more in common with prog-rock and jazz fusion than with the mechanistic, Satan-obsessed grinding that's the music's dominant public image.'"

I can't vouch for any of this stuff being "Satan-obsessed" or not, because I can't understand a word they're saying. It's all gutteral vocals, some reduced to the point of a monotone growl, which doesn't do much for me. I didn't hear a whole lot that seemed to be influenced by prog-rock or jazz fusion, either, but maybe that's just my uneducated ear.

There's not much point in me giving this one a rating of any kind, although if forced I guess I'd give it a 1.0 but I'll try listening to it more and see if I can hear anything I like. Still, it goes into the archive as a good collection of examples of what death metal sounds like.

Two more of these yet to go: Thrash, which I haven't listened to yet, and Doom, which hasn't been made available yet but which I'm looking forward to because it tends to be more "musical" to my ears and sometimes uses "clean" female vocals, which I really like.