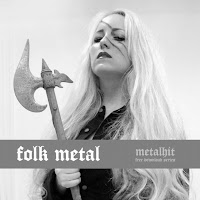 The Metalhit label ("the first extreme metal digital music store and digital record label") is releasing a series of free samplers via Amazon.com. I wrote about their Gothic Metal sampler previously. I have learned over the past few years that I have an affinity for this type of music (and goth-rock in general), and as I mentioned I liked the sampler quite a lot. I am looking forward to downloading more of their samplers, mostly for my musical education and not necessarily because I think I'm going to like the stuff. In fact I know I'm not going to enjoy some of it.

The "Folk Metal" label piqued my curiosity; I had never heard of such a sub-genre before. Upon looking it up and reading about it, I didn't like everything I read. So I'll have to make a clear qualification here.

Musically, I really like this collection. It's metal, but with mostly clear (or clearish) vocals, and it incorporates various folk instruments from the various groups' countries of origin. Most of this sampler is European and Russian, with one British group and one Australian group (updated to add: and one Canadian group). Many of the lyrical themes are based on folktales and mythologies from those countries, which to me is also interesting.

The dark side is that these groups tend toward nationalism, along with all the uglinesses that can entail. Two out of the twelve groups on this sampler are openly racist--not necessarily in the songs included here, but according to some things I have read. So, you have been warned. This sampler gets a 2.4 in my personal scale of 0 to 3.

Nevertheless, there are songs on here that I will include in my general favorites playlist, the stand-out groups being Fferyllt (who, in spite of being Russian, seem to be focused on Celtic lore), Leshak and Temnozor from Russia and Heorot from Finland.