So I haven't had much activity here this week except to update some old posts. I've had a bad head cold since last Sunday. I called in sick Monday, worked sick for three days, and took off Friday to stay in bed and take cold medicine. I'm starting to come out of it now, although I'm still not completely recovered.

The new internet service has been mostly working, and when it works, it flies. I've downloaded a few samplers that I've been trying to get time to listen to but have been spending almost all my time at home just lying in bed being miserable and trying to stay warm. So with this post I will try to catch up on the week.

I came across another amusing site that posts weird album cover art, which you may enjoy: Regrettable Music. For example: 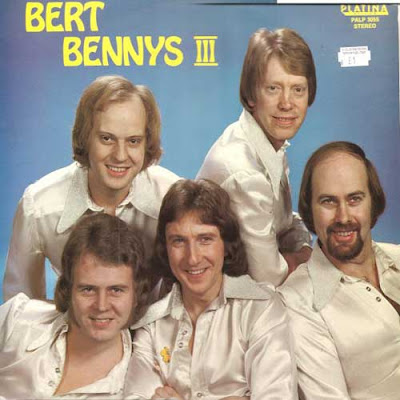 My young son was looking over my shoulder as I was first scanning over this site, and his remark was: "Eewwww!"

I got one of those FM stereo transmitter thingies that you use to listen to your mp3 player over your car stereo speakers, and it works great. I had an old one that I bought from Radio Shack about 20 years ago, and it just didn't work well at all. It was hard-wired to work on only four different frequencies, three of which were in use by real radio stations in San Antonio and its signal wasn't strong enough to block them out. This one I just got can tune the whole FM band and can block out even some of the stronger stations, although that isn't necessary since with the whole band it's a lot easier to find a more vacant(-ish) frequency. Also the old one ran only on batteries, whereas the new one can run on either batteries or being plugged into 12 volts DC. This one only cost $10 via eBay. So I should be able to keep up with listening to new downloads more easily now. I quit wearing my mp3 player while working some time ago because it interfered too much with me being able to hear my surroundings.

Amazon has been releasing some really good samplers in the doom/ambient/drone metal genre recently. In no particular order, here they are.

With a title like Melancholy Epiphony (note the pun), I clicked the download button on this one before even reading any comments or anything. Eleven tracks for about 90 minutes of music.

The Solitude Productions Compilation has 14 tracks for about 80 minutes of music. A particular "group" that recently caught my eye--The Howling Void--turns up on this one again.

Thirteen tracks for about 75 minutes of music, but the first track sounds like it was cut short. All three of these compilations have a mixture of doom/ambient metal, some instrumental, some with growling vocals and some with clean vocals. It's all in there.

And finally, although this was the first of this group that I downloaded--my first big download with the new internet service--is Metalhit's sampler of doom metal. It was on this album that I first came across The Howling Void.

Although I haven't hunted down all the countries of origin for all of groups on these samplers, I did do so for all of the Metalhit samplers, of which the doom metal sampler is the fifth (or sixth? I don't remember). Very few of these groups are from the United States, in fact I joked with a co-worker that I usually expect them to be from Finland. However, The Howling Void is from the United States, from San Antonio, Texas, in fact. It's actually only one person named Ryan who does all instruments and vocals. Here's his blog: Voidlight.

So far I've just been using Windows Movie Maker to make the stuff I've uploaded to YouTube, but I've downloaded another program that I'm going to take a shot at. It doesn't seem to be very intuitive to me so it might take me a while to get the hang of it. It does have some snazzier effects than Movie Maker though, so I'm going to try and learn it.

I am able now to read more, faster than I was before when I was stuck on dial-up. So I'm finding I actually have more time to do other stuff without feeling like I'm losing out, and that's nice. I guess that's about all I have to say for now.

Oh yeah, I also wanted to mention one other new blog I came across. This one is being written by someone who is watching every Doctor Who episode and commenting on them. He's just begun--only 7 posts so far--so you can still get in on the beginning. Just go to TARDIS Eruditorum.
Posted by AlanDP at 8:17 PM