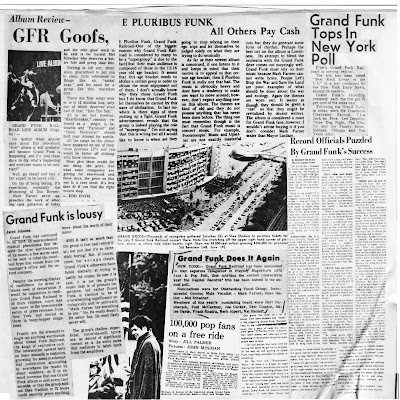 I said before I might try to upload some of this. Here is the first installment. Inner sleeve artwork from the 1972 double compilation album Mark, Don & Mel 1969-71 by Grand Funk Railroad. I couldn't get it quite perfect because that one corner is wrinkled. All four sleeve sides are collages of newspaper articles such as this. The common theme is how GFR was very proud of being hated by critics and loved by fans.

Click to enlarge, and it's quite large. Actually, it appears that Blogger, knowing what's good for me in spite of myself, has downsized it from the size I had it saved as, so it isn't going to be quite as easily readable. You know, if Blogger says there's a 8 MB limit on file size for uploads, they should mean 8 MB limit. ****heads.

Here's a text excerpt from some of that small print on the bottom right.

One group that soaks up a lot of money from teeny-boppers and "heads" is the disgusting Grand Funk Railroad. They fit the mold of trashy but saleable music like a deck of cards fits into a poker game [say what now? --ed.] "E Pluribus Funk" (Capitol), their latest release, will take care of the large-bulge-in-the-pockets thing that some people seem to have.

I can just picture that same little kid [wait--what little kid was that again? --ed.] turning the stereo he got for his birthday all the way up and putting on Grand Funk, most likely to bother his mother or something.

On the first cut, "Footstompin' Music," all there is is a bass, an organ playing one chord, and drums that sound more like someone fluffing pillows. One thing that typifies most trash music is a dull, repititious [sic], pounding bass; Grand Funk makes for further proof.

As our "young teen" jerks and twists to the droll pounding of his favorite group, Grand Funk, he imagines himself smoking a "J" with Mark Farner and discussing his three chord knowledge of the guitar (which makes the kid's talent equal to dear Mark's). After his mother makes him turn on the record player "'cause it's getting late," [wait a minute, his mother makes him turn on the record player? --ed.] he pretends to go to sleep, only to sneak out the window of his upper-middle class home. Grabbing his love beads and headband, he strolls on out to the scene on East Colfax. Then, after combing his hair to the wrong side to make it look longer, he goes from freak to freak whispering "D'ya know where I can score a lid?" [Jeez, dude...you need to see someone about your repressed fantasies before it's too late. --ed.]

And it's supposed to impress people that Grand Funk sold 15 million records in the last two years. To whom? Little teeny-boppers who look at music the way a baby looks at a skipping rope.

At least the teeny-boppers have something to musically suck their thumbs with: Grand Funk.

No, they are not looking at music the way a baby looks at a skipping rope. They are using music the way a kid uses a rope that was not intended for skipping but is being used that way anyway: they made it themselves. It might not be the prettiest thing in the world, but it works and they love it.

As for the "quality of music" argument, I agree with it, but it's largely irrelevant. It's not an argument that will ever have any effect on anyone. I usually look at how high sales are as an inversely proportional gauge of how bad the music really is. But it just doesn't matter.

I am not really a GFR fan. To me, they are another classic rock radio group that doesn't usually make me change the station. But when I read "critiques" like this one, it makes me want to hunt this guy down and beat the **** out of him. Just on general principles.

You can look Paul Parrish up on YouTube. He was a singer-songwriter type in the early 70s, and there are a few uploads there. I can't find anything on Allen Thomas. Of course, you can also look up Grand Funk Railroad and see scores of uploads on YouTube.