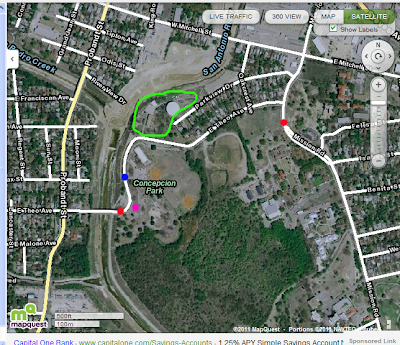 Click to enlarge a little.
This is probably not of much interest to anyone but today I figured out what was going on in this area and it made me utter a mild exclamation. I believe my exact words were, "Holy cow!"
This is an area that I motor (as a verb; it means "to read meters while driving from one meter to the next, rather than walking"), and which I did today. There has been a massive amount of construction in this area for the past several months. Concepción Park has, or had, three meters, two of which are not really pertinent to this post but as a by-the-way are accessible from E. Theo near the swimming pool (the rectangular thing inside the bend of E. Theo). The pink dot is where a large meter is, or was, inside a vault. It rarely showed any consumption. However, because of all the construction, today was the first time in 3-4 months that I was able to go inside and try to find it. This is an old map; everything there now looks completely different. It was so changed that all I could do was park in the general area and walk around dumbly looking for any signs of the old vault. One of the construction workers asked if he could help me; I told him I was looking for a water meter that used to be there--it had been in a big vault. He looked at a co-worker and asked, "Hey, was there a meter in that vault we buried?" I started laughing, and then they both started laughing. So this is another "lost" meter that I'm sure will remain on the route for months, perhaps years to come, until someone figures out that it isn't there anymore. I'm pretty sure it was removed before they buried the vault; unfortunately, the people who remove meters never seem to tell the rest of the company about it.
Anyhow, there is now a new street in this place. It begins where that red dot is on Mission Road and (it's still closed so I don't know exactly how it runs) comes out where that other red dot is on E. Theo. The old E. Theo (from Mission Road) now dead-ends about where the blue dot is and there is no longer a street between there and the bridge. I don't know what the name of this new street is going to be. Will it be E. Theo? Will we have two roughly parallel streets that are both called E. Theo? Or will it suddenly change names as it comes across the river bridge and become something else? Will the old E. Theo-from-Mission Road be reconnected to the the old E. Theo/unnamed new street? Who knows?
As another by-the-way, that area that I circled in green is the big Mission Road Pump Station. There used to be 4 meters in there. One of them went to a small house. I was told that that house was once used by a full-time security guard who lived on the premises, but it hadn't been used in a long, long time. Anyway a couple of years ago they moved the house out and removed the meter. It took about 6 months (or more) for them to eventually take that meter off our route.
The pump station has also been undergoing extensive construction. The last time I went in there, I don't know how long now, probably about a year, all three of the remaining meters had been removed. Because of the construction, I haven't been inside there since, but of course those 3 meters are still on the route and I don't know if they'll ever disappear or if they plan on them being eventually put back in the ground.
So anyway, I don't think you are technically supposed to cross the bridge there at E. Theo right now because the new street is still officially closed; however, I think it is passable. I'm just not going to try it because I'm sure someone would complain about it.
This route has been a constant source of confusion and entertainment since I started doing it. It was one of the few routes I was assigned to when I was first hired that I still do every month. Never a month has gone by that I didn't have a mysteriously disappeared meter (or in a few cases, a mysteriously appeared meter). I know it now so well that I don't even think about it anymore, but as I told a co-worker today, if they ever threw somebody onto this route cold he would be completely screwed.
Posted by AlanDP at 2:28 PM