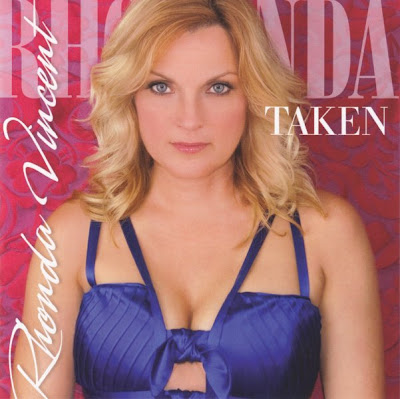 Uh...now where was I? Oh yeah...
As I said before, this was one my dad & stepmom asked me to get for them, since I have a reputation in my family as "the guy who knows how to find and get things." Since the switch to digital TV, my dad has been watching a show on one of the alternate KLRN channels called WoodSongs Old-Time Radio Hour. I don't have my TV hooked up to a regular antenna to pick up this channel, but I may have to do that just so I can watch this program. They discovered Vincent when she performed on this program.
When I looked her up and saw that she is a contemporary female bluegrass artist, I knew I would like her stuff too, so I ripped the CD for my own collection before passing it along to my dad. Rhonda Vincent is a singer and songwriter who also plays fiddle, guitar and mandolin. Her backing band, The Rage, all play traditional bluegrass instruments and some of them also provide backing vocals.
I don't know if any of these songs are old bluegrass numbers; I'm familiar with only one track. But heck, it's bluegrass with a female lead and sweet vocal harmonies so how can you lose?
The only track I was already familiar with is "Back On My Mind," which was a hit for Ronnie Milsap back in 1979 and continued to be played on some country stations well into the 80s. P.S. Back in those days I was a big Ronnie Milsap fan.
The only track I didn't particularly care for is the last one, which sounds like it was being sung by a couple of children. It's very sweet and all that, just not really my thing, and it's not really bluegrass.
Anyway, great album. Available on CD or mp3 download at Amazon, which has samples of all the tracks.

UPDATE: You can listen to Rhonda Vincent's appearance on WoodSongs Old-Time Radio Hour by clicking on the WoodSongs Archive Showlist. Just go down the list and look for her--she's been on there several times. Both video and audio-only podcasts available.
Posted by AlanDP at 8:49 PM