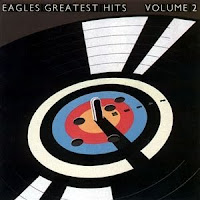 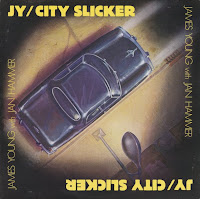 Eagles: Greatest Hits Vol. 2 (1982)
James Young: City Slicker (1985)
I actually finished converting two records yesterday. I hadn't done any of this work in a long time, so I picked out two that were in good shape and wouldn't require much work, and two that were relatively close to being finished anyway.
Nothing really special here. I did the Eagles record so I'd have an option in case my Hotel California record has some problems. Also it has four tracks from The Long Run on it, and I don't have an probably will never get that one. And finally because it has "Seven Bridges Road" on it and I did want their version of that song. Someday I intend to get hold of all the covers of that song I can find and comparing them all, just for fun. I think I got this record as part of of the introductory offer for some record club back in the 80s because they didn't really have anything else I wanted.
The James Young record I bought at Hastings in Seguin as a new release because back then I was still a fairly big fan of Styx and I wanted to hear his "solo" work. I never heard anything from it on the radio and I guess there weren't any real hits from it. Nothing on it that sounds like it could have been a radio hit, to me. It has a couple of songs that will go on my big general favorites list, but nothing really great.
I've done a lot of free sampler downloading from Amazon lately and I took a break from building the big playlist to give them a trial listen. So far the only one that had anything I really liked was an EP from Dan Mangan called Robots vs. Indie Queens, especially the song "Robots." Also somewhat interesting is a collection from the industrial group Iszoloscope called beyond within and so on. But then I sometimes am in the mood for industrial and I realize that's probably not the thing of most readers of this blog.
There have been a few other downloads I'll probably get around to mentioning, but I want to listen to them more first.
Posted by AlanDP at 7:33 PM