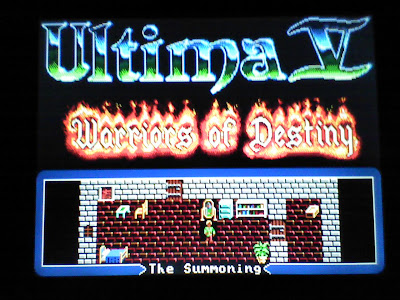 On a whim, inspired by I know not what, I downloaded this game from one of those websites that has ancient, lost computer games. After spending a few more minutes downloading and installing DOSBox and DOSShell, I started it up.

For about the next 20 minutes, I kept thinking to myself: Holy cr*p! I'm actually playing Ultima again!!!

Brer should still remember this game, since he whiled away several hours watching and helping me play it. Ultima V was released in 1989. I think I bought it in 1990, which was the year I bought my first computer. It was a laptop with dual 3.5" floppies (DD, not HD), no hard drive, an 8MHz 8088 µP, with a blue "supertwist" LCD screen. It also had a monitor output for an external CGA monitor, which I used almost exclusively--hardly ever using it as a portable laptop. It would take 2 or 3 minutes to load the dungeon whenever you went from the surface to a dungeon level. I spent months playing this game, and never finished, because I had mistakenly assumed the Underworld entrance that I needed to finish the game was in a place that it was not. Eventually I gave up and went on to other games (most notably Doom and Doom 2, Aces of the Pacific and Aces Over Europe).

I'm sure I still have all the documentation in a box here somewhere, and probably the original floppies as well, but it was easier to just download the docs from the internet. Twenty years ago I kept a spiral notebook with everything I had learned so I knew where to go to get stuff and who lived in which places. And since there was no internet back then from which to download extra information, I also painstakingly mapped out every dungeon level on graph paper.

Sure, the graphics look primitive now, but this was and still is a game that is very complicated and sophisticated, requiring interaction with multiple characters. It's not just some hack & slash adventure. Certain people can you tell you specific information, but you have to know who to ask and how to ask. It takes a long time to figure stuff out, and a long time to slowly build up your knowledge and combat experience so you can gradually take on harder and harder monsters and get better weapons and more treasure, just like D&D. Also like D&D, your characters are based on a class and level system, gaining hit points and the ability to cast more powerful spells with higher levels.

Fantastic game. I also installed it on the old computer and my son spent a few hours today working at it. Unfortunately, I think his patience is not quite up to a game like this yet, but before he wore himself out on it, he was completely engrossed in the exploration. I'm sure he'll go back to it, especially if I give him a few more hints.

Well, as for other stuff, I had to work mandatory OT yesterday, so I didn't get my usual 2-day recovery period. Working in this heat is really bad, and I don't think it's an exaggeration to say that I was overworked this week. My legs stiffen up every time I sit down for too long. Some bigwigs at work began a new program that was supposed to eliminate the need for overtime. However, no matter how many people pointed out that it was really going to guarantee overtime, the bigwigs wouldn't listen. So I think it's safe to assume that I'll have one Saturday of mandatory OT per month for the foreseeable future.

I somehow managed to have only 2 errors last month, which I think (I think because I've never had that few before) means I get a $100 "accuracy bonus" on my next paycheck, which is nice. However I should point out that I really made only 1 error. Due to the way they track errors, it's almost impossible not to get stuck twice for only one error, and there's nothing we can do about it. They're supposed to change the system next year so that doesn't happen, the problem is, many times there should be multiple errors, and when they change stuff it won't happen anymore. As one of my co-workers asked our supervisor, "Why should I bother doing my job right when it won't matter anymore?" Unfortunately, our supervisor isn't one of the bigwigs behind all this mess, and she can't do anything about it, either.

Sigh. I guess I should start cross-training with other departments, but I just don't want to. I like this position too much to go into something else. The freedom of not having to work with someone else all the time is just too nice to give up.