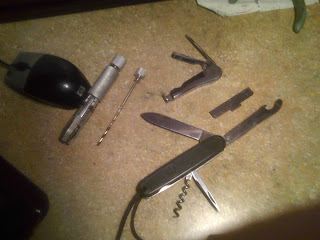 Since I had recently mentioned pocket knives, I thought I would post a photo of my back-up knife.  I got this one from some mail-order military surplus place many years ago and have hardly ever used it.  It's also made by Victorinox (the Swiss Army knife folks) but as you can see it's not a SAK.  This one was made for the German military, I don't know what era, and is a good knife as every Victorinox knife I've ever had is.  A standard blade, plus a saw blade.  The piece of metal lying alongside the saw blade is a metal cover for the saw.  I suppose they put that on there so you don't lose a finger when you use the bottle opener.  My biggest complaint about it is that it doesn't have a Phillips head screwdriver.  Slightly lesser complaints are no tweezer and no toothpick.  I think this is probably the only corkscrew I own.  It came with that lanyard rope that you see in the picture and I never bothered to remove it.  By the way, I used this knife when I was teaching some Cub Scouts how to sharpen a knife for their whittling chips.  Not that it has ever needed sharpening.  It keeps an edge like Mournblade.

And just for kicks, two other tools that are always at my desk.  Just above the knife is my good pipe tool which I use only here at my desk.  Outside I use other, cheaper and easier-to-replace pipe tools.  To the left is a Senior pipe reamer with the drill removed.  The drill is used to clean out the air passage in the shank.

My phone doesn't take really good pictures, but you can click to enlarge if you want to.
Posted by AlanDP at 7:14 PM