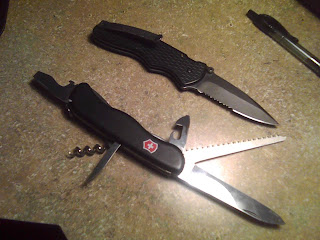 In the course of my job I often come across interesting items just a-layin' around.  For example, yesterday I was in a neighborhood where they were doing junk collecting and I found a box full of random Lego pieces that someone was throwing out.  I brought the whole box home, which to my son was like getting a late Christmas gift.  I sometimes find cash, although it's most often coinage or dollar bills.  On two occasions I've found a twenty and a five in close proximity, and once I found two twenties just blowing down the street one very windy day.  I had to chase one of them.

I've also found several knives, however, most of them are Chinese junk.  They have plastic bolsters, the blades are wobbly and the lock isn't positive.  I do pick these up but just throw them in my toolbox.  I wouldn't use them for anything but tackle box knives--by which I mean I wouldn't be bothered much if I accidentally dropped one in the creek while I'm fishing.

However, I have found two very good knives which I thought I'd show because one of them I found just today.

The upper knife in the photo I found last year sometime, and I carried it for a while even though the belt clip wasn't as tight as it should have been.  And then I snagged the clip on something and bent it even worse, which you might be able to see in the photo.  I haven't carried it since then, but if I can find a small enough Torx driver I can take the clip off and bend it back the way it should be.  It's a Gerber with an assisted-opening 3" semi-serrated lockblade.  It's a great general-purpose medium-duty knife, and I did use it several times to cut landscaping fabric that some idiots insist on covering their meters with.  The blade locks both opened and closed, with a button on the bolster that releases it.  So as soon as I can find a proper Torx driver, it will see use again.

The lower knife I found just today, and is a Swiss Army knife "Forester" model, if I read their website correctly.  The knife blade and the large screwdriver/bottle opener both lock.  There is nothing wrong with this knife except that it's missing the toothpick and the tweezer, and those can be replaced.  I do need to clean it up a little and apply a tiny squirt of Rem oil or two to smooth out the action, but that's about it.  I couldn't believe it when I saw this knife just lying in the street and immediately noticed the SAK logo on the bolster.  They sell on the Victorinox website for $42.  The blade and the saw are both still extremely sharp.  I've never had a SAK that failed to hold an excellent edge.