A collection of cool album covers 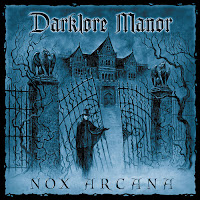 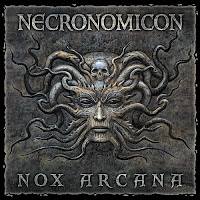 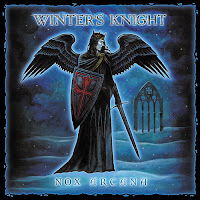 I do not own all of these, but this is a duo I heard about because of their Lovecraft-themed albums.

Nox Arcana is the duo of Joseph Vargo and William Piotrowsky.  Vargo is also a visual artist and he created all of this cover art.  Vargo was also previously involved with a similar group called Midnight Syndicate.

The music?  Well, Wikipedia calls their music neoclassical ambient.  Most think of it as "dark ambient" or "darkwave."  Instruments used are both electronic and acoustic, with some vocal choirs but almost never any lyrics.

Each of their albums has its own theme, and mostly to sort it out in my own mind, I'll go down the list here.  So this is a list of album titles followed by who/what inspired them.

Darklore Manor (2003) - Inspired by a "haunted house" near Salem, Massachusetts.

Winter's Knight (2005) - Gothic Christmas/Solstice music, with some inspiration from Dickens' A Christmas Carol.

Blood of Angels (2006) - A collaboration with Michelle Belanger, who sings on all tracks.  This album is the notable exception in having actual "songs" rather than instrumentals.  (There are other lyrical songs throughout the whole collection, but they rare).  Inspired by, and I quote, "ancient Enochian myths to tell a story about mythical Watcher Angels, who 'abandoned Heaven for a taste of mortal love.' According to the Enochian legend, the Watchers (also called Grigori or 'Fallen Angels') are celestial beings who were condemned to the earthly realm after uniting with mortals and sharing with them their mystical secrets."  So there you go.

Phantoms of the High Seas (2008) - Pirate lore and stories of ghost ships.

Zombie Influx (2009) - A zombie invasion mixed with faux news reports a la the The War of the Worlds thing.  A collaboration with another musical project called BuzzWorks.

Theater of Illusion (2010) - "An old theater haunted by a masked magician."

House of Nightmares (2010) - A old (haunted) manor house next to a cemetery.  Another collaboration with BuzzWorks.

Pretty good stuff, if you're into "neoclassical ambient" with a heavy emphasis on minor keys.
Posted by AlanDP at 7:20 PM