I can't imagine how this would work, nevertheless, I am intrigued

I wasn't motivated enough even to write a weekend update this past week, but I remembered I still have a few work pix that I was saving for a rainy day.  This was taken early in the morning about 3 weeks ago, on my regular cycle 14 on FM78.  I was amused by the sign on the side of the truck. 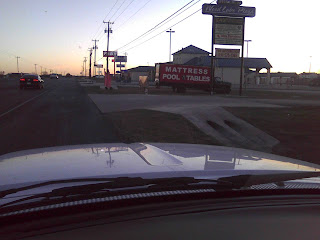 I had a couple of opportunities for an interesting photo or two today, but unfortunately I had left my phone behind because I was getting rained on.

However I still want to mention something that I just discovered today and which has a website with plenty of pix.  I had been by this place before, but the previous times I had seen it, there were no signs up saying what it was.  It looked to me like a big hole in someone's backyard that had been fenced off to make a mini-park.  I'm talking about the Robber Baron Cave, slap in the middle of a fairly densely-populated area on Nacogdoches not too far south of Loop 410.  If you drive down Nacogdoches and you don't already know it's there, you'll probably never notice it.
Posted by AlanDP at 7:13 PM