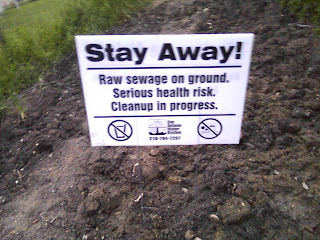 4165 being the route number for my regular cycle 11.  In the area of the northeast corner of the intersection of Rittiman & Harry Wurzbach.  Because we are having a wet spring, the overgrowth has already assumed jungle-like proportions.  It was murderously difficult today, and I expect today to be the last time I'm able to actually finish the whole thing until next October or November--unless it stops raining.  One halfway decent rain per month is all it needs to remain a nearly impassable mess.

Anyway, this sign has been there for two months now.  There's another one a few feet away from it in Spanish, and yellow "caution" tape which I climbed through because there's just no other way.

I think the "cleanup" is actually finished and these are simply forgotten signs.  I occasionally find such things in alleys.  I've picked up 2 spare traffic cones (which were later stolen from the street where I had them around my truck), and several of the small sidewalk-sized barricades.  You see, there is actually a specific barricade sub-department within some other department.  They go around putting out the barricades whenever needed, but they apparently never come back for them even after the work is finished.  So whenever I find abandoned barricades I just take them and use them to block #2 boxes in high traffic areas where the lids have been stolen.  Of course I have an ulterior motive for this.  When I do it I get to fill out a safety card and turn it in, which improves my "safety awareness" rating or whatever, which improves my overall performance for the year.

So, in case this wasn't obvious, they know I'm grabbing abandoned barricades because I report it every time I use one.  No one has ever told me not to, and I get safety credit for doing this, but I can't officially go somewhere within the company and have barricades issued to me for this use.  S.O.P., folks.

Another funny thing about this route today was a new(-ish) meter.  There's a place where they recently built a new mini-storage place.  Okay, so before it was there, the space it occupies was mostly empty with a few vacant shops or stores or something.  There was an old vacant meter there in a #1 box (rectangular like a #2 box but smaller).  That is, the meter no longer was being used and was officially shut off, therefore we call it "vacant."  Some time ago, the old meter was removed--and also removed from my Roadrunner (handheld computer)--and the box was empty for a while.  Last December a new meter was put in it, but the new meter never turned up on my Roadrunner.  Also, it was leaking and the box was always so full of water that I couldn't get a meter number off of it.  Last month I filled out a leak report and turned it in, simply giving detailed directions to the location because I didn't have any information and wasn't sure of the address.  So they fixed the leak.  This month, the water was low enough that I was finally able to get a number off of it.  So I called it in just to ask about it see what was up.  I was told that that meter was on a cycle 13 route.  "That's ridiculous," I replied, "when the old meter was here it was on a cycle 11!"  When I got back to the office I took all the information I had collected and told my supervisor about it.  The last time I saw him, he was sitting at the computer poring over the database, shaking his head and muttering to himself, "That's not right.  This makes no sense.  Something fishy here," and that kind of stuff.  Pretty funny.  Yet again:  S.O.P., folks!  Changing it back to my route where it belongs will be tricky.  A meter put on the wrong route but the right cycle is easy, and they fix those all the time.  But if it was put on the wrong cycle, that means changing it back to the right cycle also means changing the billing date.  The billing department hates that because customers hate it.  It means there's going to a short or long billing cycle for that meter and everybody has to change their schedules.  On the other hand, the storage facility has two more meters that are both for irrigation, and they are on my cycle 11, which means they're getting two different bills on two different dates (one for cycle 11 and one for cycle 13).  I feel like I actually accomplished something today by creating all this chaos and consternation.
Posted by AlanDP at 6:08 PM