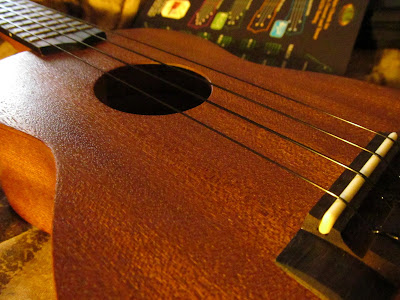 A ukulele.  I did some internet research on some uke discussion forums to find out what the best one would be that I could get for $100 or less, and the consensus was the Makala.  I got this one for $70, and it came with a gig bag and a pitch pipe, although I didn't really need the pitch pipe.  I read several recommendations to upgrade the strings on it, though, so I will probably do that eventually.

I've been practicing with it some every day, until my left hand gets tired and starts cramping, and I am happy to report that I can tell I am making progress with it, although I'm sure it will be a long time before I can claim to actually be able to play it.

Of course this is a soprano uke, the smallest one, but based on my progress with it so far, I can already foresee the day when I will be looking for a larger tenor uke.

Thanks to YouTube I've been able to find lots of great video lessons to watch and get some actual instruction with it.  I've also been busily hunting down the chords of songs that I want to build into my repertoire someday.  I already have the ability and quite a bit of experience from my past musical experience/education in figuring out chords by ear, so I've had to tweak a couple of them to get them to sound right, but still it's a lot easier when someone else has already done most of the work.  A couple of them I've had to completely transpose because they were pitched too far wrong for my voice, but that's no big deal, either.  Here's a list of songs I've hunted down and begun playing around with so far.

All My Tears (I'm most familiar with the Emmylou Harris version, but she didn't write it)
Blitzkrieg Bop (there is actually a ukulele tab for this available on the internet)
Boat on the River (an old Styx song from Cornerstone written by Tommy Shaw)
Cool Water (the old cowboy song most famously recorded by Sons of the Pioneers)
I Washed My Face in the Morning Dew (Tom T. Hall)
Orphan Girl (same as All My Tears)
Scarborough Fair (but more the traditional version than the famous Simon & Garfunkel version)
Streets of Laredo (another old cowboy song; I'm most familiar with the Don Edwards version)
That's How I Got to Memphis (Tom T. Hall)
Watermelon Wine (Tom T. Hall)
Whoopi Ti Yi Yo (same as Streets of Laredo)
Angel Band (an old folk/gospel song that has been covered by numerous bluegrass and country artists)
Good Ole Boys Like Me (Don Williams)
Rank Stranger (same as Angel Band)
Downbound Train (Springsteen)
The L&N Don't Stop Here Anymore (Jean Ritchie, but covered by numerous country/folk artists)
Angel from Montgomery (John Prine, but also covered by Bonnie Raitt)
Hallelujah (by Leonard Cohen but covered by others, notably John Cale for the movie Shrek)

So far, it has been a lot of work but also a lot of fun.  I hope someday to be able to claim that I can really play it.
Posted by AlanDP at 8:25 PM