Gargoyles was a made-for-TV horror movie from 1972.  I think I read somewhere once that it was the first horror movie ever to be made for TV.  I don't know if that's true or not, but anyway, since it was made for TV in 1972, that means it's pretty tame by modern standards.

However...consider:  my sister and I saw this movie in 1972, which means I was 8 years old and she was 4.  At the time, I thought it was the best movie I'd ever seen, and it gave my sister nightmares.  I hadn't seen it since that one time in 1972.  So when I saw that I could get the DVD from Netflix, I added it to my queue immediately.  The screen caps I've included here were a few that I took so I could put them on Facebook for my sister's benefit.  Her only reactions was, "Where did you get those?  That movie gave me nightmares!"  I was thinking about getting a more complete collection of screen caps but decided it was too much trouble, so there you are.

It's full of people I didn't recognize, or just barely recognized.  The main protagonist is played by Cornel Wilde, who was more of a leading man type early in his career but then became more of a character actor, turning up on things like this, Love Boat and Murder, She Wrote before he stopped acting in 1987, two years before his death.  He plays a professor of paleontology and anthropology who is going out into the desert in the southwest somewhere because of some vague tip/rumor that some guy out there has something strange to show him.  He's accompanied by his daughter, for some reason, played by Jennifer Salt, whose most prominent role was probably as Eunice Tate on Soap several years later.  In this movie she's mostly the screamer, who also displays several of those side-b00b shots that used to be so popular on TV.  Whatever happened to the side-b00b?  I kinda miss it.

Although we are never told exactly where in the southwest this is supposed to be happening (I don't think), I can tell you that it was filmed on location in Carlsbad Caverns National Park; Carlsbad, New Mexico; and Laredo, Texas. 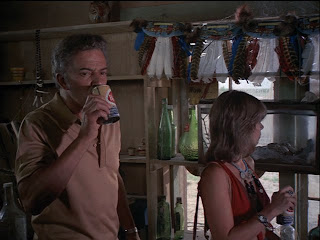 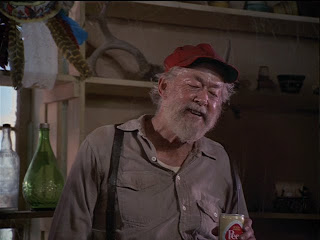 Which may explain the Pearl beer.  I guess they had a big enough budget that they didn't have to settle for Texas Pride.  The above shot was just to get a glimpse of the beer can, but since he's here, I'll mention that this is Woody Chambliss, another character actor from Texas.  His first movie role was an uncredited appearance as the blacksmith in the original 3:10 to Yuma in 1957.  He turned up in a quite a few TV shows and movies (many of them westerns such as Gunsmoke and Have Gun, Will Travel).  He also had a part in Logan's Run and--get this--Sgt. Pepper's Lonely Hearts Club Band.  According to imdb, he also somehow managed to appear in some movie called Riding Fast in 1988, seven years after he died.

So anyway, Uncle Willie--as Chambliss' character is called--has found a complete skeleton of something out in the desert which he wants to show the Professor, who believes it is a fake made up of various animal and human parts.  As they are in his barn arguing about the veracity of the skeleton, darkness falls, and instead of heading back to the house, Uncle Willie throws a bar across the inside of his barn door because, he says, it's not safe to be outside after dark.  So the Prof decides to humor him and begins interviewing him about the legends regarding these creatures, while the Prof's daughter tape records the interview.  Then suddenly the barn is attacked by several somethings which begin ripping through the wooden walls of the barn.  The obligatory kerosene lamp falls over and catches everything on fire.  A roof beam falls and kills Uncle Willie, the Prof and his daughter flee to their car with the tape recorder and the skull of the skeleton, and high-tail it for the nearest town.  Their car is attacked by these things, which damage their windshield and smash the car up pretty good but don't disable it.

Looking back now, I think one of the things that really appealed to me as an 8-year-old kid with an active imagination was that they refrain from clearly showing what the monsters are for a while, leaving my imagination to conjure up all sorts of horrors.  But that doesn't last long.  Pretty soon the gargoyles break into the Prof's motel room to get back the skull of their fellow, and, well, the shot just below is one of the few specific images I remembered from 40 years ago.  This guy slowly rises up and peaks over the foot of the Professor's bed.  Horror! 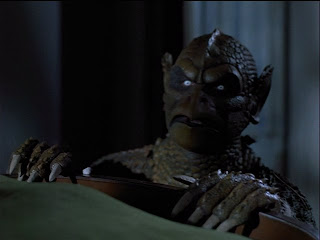 And a bunch of other stuff happens...you can watch it for yourself for the details.  Of course, the special effects of 1972 usually seem pretty comical to us now, but this movie won a Primetime Emmy for Outstanding Achievement in Makeup.  The gargoyles all have certain things in common:  leathery, reptilian skin, claws, and those creepy white eyes.  But other than that, there is a great variation in appearance.  Some have some hair on their bodies in various places, some have ridges or spikes on their backs and/or heads, they are different heights, some have bird-like beaks instead of mouths, some have horns, and a few have wings.  We learn from watching the movie that the ones with wings are "breeders," so apparently the non-winged ones are like sterile workers or something. 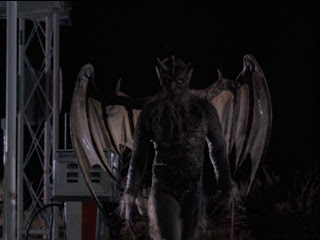 Here's a shot of the leader gargoyle walking around at the gas station.  You can see that he's a "winged breeder" and that he has some hair.  Another thing they did with the gargoyles was they filmed them in slight slow motion, which I think gave them a creepy, otherworldly appearance, as if they existed in a slightly different phase of time from humans. 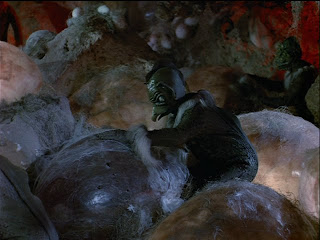 Here's one of the workers with a bird-like beak like I mentioned.  This one is seen only in the egg cavern, rubbing eggs which are about to hatch.  The "rubbing" action on the eggs appears to encourage the hatchlings to break out, but that's just an assumption based on my imagination. 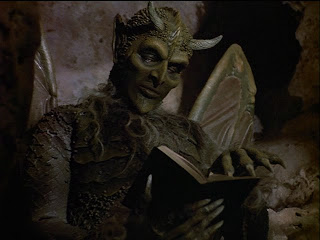 Here's a close-up of the leader gargoyle reading one of the Professor's books, which he stole from the Prof's motel room.  It's impossible to recognize him here, but you may know him better like this: 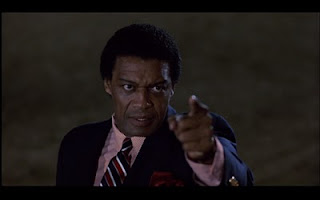 Bernie Casey was a pro football player for the San Francisco 49ers and the Los Angeles Rams from 1961 to 1968, and appeared in his first movie role in Guns of the Magnificent Seven in 1969.  He's been in a buttload of movies since then, for example two of my favorites:  Revenge of the Nerds and Bill & Ted's Excellent Adventure.  However, he doesn't do the voice of the leader gargoyle.  The voice is supplied by an uncredited actor named Vic Perrin.  Perrin did some acting earlier in his career, but most of what he did was voice acting, and anyone who watched superhero-themed cartoons during the 60s and 70s has heard his voice.  Here's one you should know well:  Vic Perrin was the voice of Dr. Zin from Jonny Quest.

Although I didn't get a screen shot of him, there's one other actor in this movie whose face I recognized right away, even though I didn't know his name:  Scott Glenn.  Another "that guy" character actor who is easily recognized by his squinty eyes, high cheekbones, and penchant for playing hardcases.  In this movie he plays a sort of outlaw dirt biker who turns good, and he was young enough to still have dark hair--later on, as he aged, his hair turned silver.

I usually have a pretty hard rule against movies being remade, because I think remakes are just Hollywood's way of admitting they are all creatively bankrupt, but I think this movie could stand a re-make.  It isn't long enough, and there isn't enough character development.  The only problem is, I'm sure it would be turned into some politically correct b.s. screed about intolerance and Islamophobia or some such.  Although the imdb entry says that the gargoyles "just want to be left alone," and this is suggested early in the movie, during the leader gargoyle's Villainous Summation near the end, he explicitly states that once all the eggs are hatched, he plans on wiping out humanity and replacing humans as the dominant race on Earth, so all that "just want to be left alone" stuff is pure nonsense.  I think they would have had a pretty hard time with wiping out humans anyway.  The gargoyles do have much greater strength than humans, but they can be killed just as easily as a human with conventional weapons such as shotguns and pistols.  Besides that, they reproduce only once every 600 years.

I guess I shouldn't say any more except that the movie does has a sort of open ending which could have led to a sequel.

It isn't nearly as scary now as it was when I was 8 years old, but I still enjoyed watching it.  I guess it was mostly nostalgia, so if you didn't see it as a kid, you might not enjoy it as much.
Posted by AlanDP at 8:53 PM