Playing with the runtastic app

Here is me playing with the runtastic.com smartphone app.   Our first map is from Tuesday.  I had never done this one before.  I added the blue line in because it didn't start tracking me right away--I think it took a few minutes for the GPS to lock in.  Anyway, the green and red dots should have been right on top of each other because this route starts and ends in the same place.  This was my longest single route of the week at slightly over 4 miles, and with the partial that I also did, made it the longest day of the week--as far as distance goes.  I tried using a different app to map the partial, but it didn't post to FB like it was supposed to, so I didn't get a map. 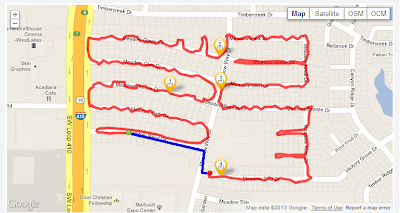 Wednesday's full route.  The words "Five Palms" will cause all meter readers to shudder in horror.  This is the worst part of town to work in because of the kind of lids that are used on the meter boxes there.  Five Palms isn't visible on this map but it's in the area.  The lids here are what we call "oval lids" because they are oval instead of round.  There are numerous different kinds of oval lids, ranging from a major pain in the a** to a hellish, nightmare-inducing pain in the a**.  The worst kind were obviously invented by a sadistic psychopath. 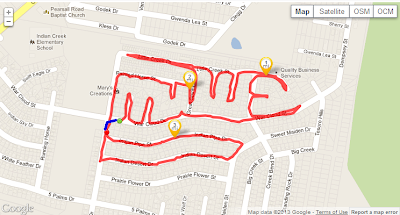 Wednesday's partial, in a different part of town where the work is much easier because all the lids are round here. 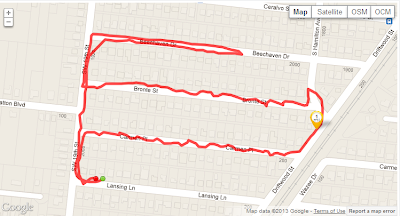 Thursday's full route.  This is another rough one, mostly just because the terrain is so uneven.  I've been doing it for so long that it doesn't bother me as much anymore, but I still admit it's a hard route.  The green part is to show the part that I drive through instead of walking.  There are only 75 meters in all that big area where the green is, and it takes an hour to walk it.  In the rest of the route I can average around 140-150 meters per hour.  After I started driving that green part, it took 30 minutes off my total time.  P.S.  One of my rules of routes is:  If it incorporates or even touches Broadview, it's gonna be messed up.  The same rule is also true if one replaces "Broadview" with "Vandiver." 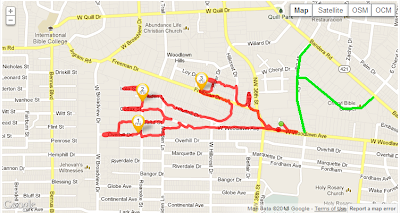 Thursday' partial.  Someone at some time in the past sequenced this one so that you're supposed to go down Poplar street, then climb a dangerously rusty and dilapidated 5-foot chain-link fence to get into the church property, walk all the way across it to McMullen, then climb a 6-foot chain link fence to get back out and read that one meter where I put that green dot.    Well, that's not how I do it.  After I finish everything else, I just drive over there and get that last meter. 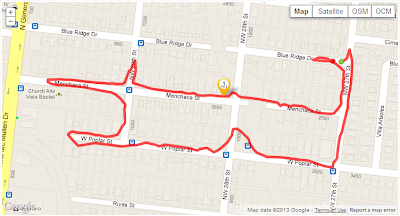 Alamo Heights full route.  This one's pretty rough, too, and it has some major hills that are just murder in hot weather.  I drive that part that I drew on there in green.  During the worst part of summer, I drive out those little dead-ends on the bottom section, too.  That's where all the worst hills are. 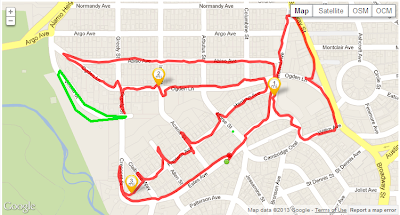 Alamo Heights partial.  On the other side of Broadway.  This one is mostly alleys, which you can see because the red lines aren't going down the streets.  But in this part of Alamo Heights the alleys are all paved, so it's not bad.  I drive the green part. 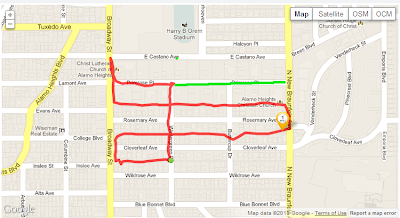 On that lower left rectangle, you can see a little "blip" where the line isn't quite as straight.  That was where I went into somebody's back yard so I could run some water and check if their meter was still working.  That's some pretty good detail, I think.
Posted by AlanDP at 4:56 PM