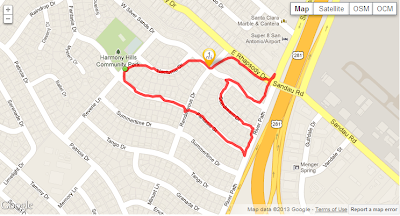 Not a good day today.  This is my usual cycle 8, which normally is a pretty good route.  Smooth terrain, all fronts, no dogs.  This route is officially sequenced so that it begins and ends right at Rhapsody and what on this map is inexplicably called "River Path."  There are no such signs on this street.  Pretty weird, but not unusual for Google Maps.  All signs call it San Pedro.  Anyway, I quit doing this route by the official sequence a long time ago, because I didn't like having to park in someone's parking lot on Rhapsody.  So I have been parking at Stardream and "River Path."  Since, like almost all foot routes, this route is circular (it ends where it begins), you can start anywhere and eventually get back to your starting point.

I realized last summer that I could park at the community swimming pool--the intersection of Fantasia and Reverie--and this would make me come back to my truck halfway through the route and then again when I finished, because you cross that intersection twice coming from two different directions.  I did this during the summer so that I could take a Gatorade break at the halfway point.  Since summer is coming up again, I thought I'd do it this way again just to make sure I knew what I was doing, because I might eventually completely resequence it so that it "officially" begins and ends here.  Also, I figured if it cooled off by the time I got back to my truck the first time, I would be able to grab my jacket.

But it started raining.  Only a 20% chance of rain, but I should have known this meant I was going to get absolutely hammered.  I stopped and took shelter several times going down Fantasia toward "River Path," and as I was heading back down Stardream, the norther hit.  So, I was wet, and now I had frigid 30 mph winds hitting me.  I started running from meter to meter, but pretty soon I realized this wasn't going to help.

When I got to Rhapsody and Rendezvous I diverted from the route and skipped all of the West Rhapsody stuff and actually ran from where that 1 mile mark is all the way back to my truck.  Man, that was unpleasant.  I can walk quickly for hours and hours, but running kills me, partly because both of my ankles are messed up, probably from repetitive stress (the Achilles tendons are the problem).

When I got back to my truck, I fired it up and turned on the heater, put on my jacket and finished the rest of my coffee, which was still hot because I have a totally awesome Thermos travel mug that keeps coffee hot for hours.  Mine is black, and I got it at Wal-Mart, and if you think $20 is too much to pay for a travel mug, you probably have never had one that is actually leak-proof and keeps hot drinks hot.


So when the rain slacked off a little, I had to backtrack and do everything that was left, which was quite a lot.  It still rained and I got totally soaked, but eventually it stopped and by the time I finished I was mostly dry.  But I was still chilled and, as usual, working in a cold rain makes me really tired.  Also my legs are hurting (especially my right ankle) from running up that hill back to my truck.  When I finished all this, I went and got the stuff on W. Rhapsody that I had skipped earlier, which I didn't bother to track.  I still had to do my partial route, which I also didn't track because I decided--screw it, I'm just going to drive the whole thing. 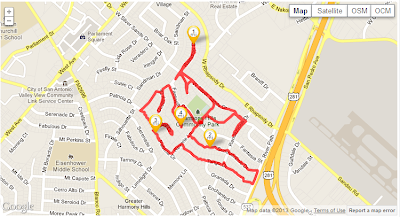 Not a pleasant day.
Posted by AlanDP at 7:48 PM