The Worst Handguns in History

Via Alphecca, I found this entertaining article about The Worst Handguns in History. Some of them I've never heard of. An upcoming article will also feature the ugliest handguns in history. I think the Hi-Point should probably make both lists.

UPDATE: A thought just occured to me: Why was the Lorcin not on this list? It certainly must be one of the worst handguns in history. I have a .380 Lorcin. I have not attempted to fire it in several years, and in fact, I removed the striker so that it is not currently capable of firing. The first shot will work, and it will hit what you aim at, but whether any subsequent rounds will actually make it properly into the chamber is anybody's guess.

As for the ugliest guns, I would not include the Liberator as they appear to do (the list isn't up yet, I don't think). This was a special purpose gun never intended nor used for commercial sales. But that's just me. On the other hand, I would nominate the Downsizer. 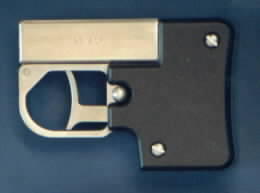