You may notice that I haven't advocated an outright boycott of Google on this blog, I've just been poking fun at them because they have made themselves such an easy target. I received a comment that tipped me off to another viewpoint and more information.

So if you think you're going to take the righteous highground and use Yahoo instead, think again:

The media watchdog accused Yahoo of becoming a "police informant" in order to further its business ambitions.

A Yahoo spokeswoman said it had to operate within each country's laws.

"Just like any other global company, Yahoo must ensure that its local country sites must operate within the laws, regulations and customs of the country in which they are based," said Mary Osako.

Shi Tao, 37, worked for the Contemporary Business News in Hunan province, before he was arrested and sentenced in April to 10 years in prison.

According to a translation of his conviction, reproduced by Reporters Without Borders, he was found guilty of sending foreign-based websites the text of an internal Communist Party message.

Reporters Without Borders said the message warned journalists of the dangers of social unrest resulting from the return of dissidents on the 15th anniversary of the Tiananmen Square massacre, in June 2004.

I would like to recommend reading Supporting Google in China at The Blog Herald.

Many years ago I gave the valedictory speech at a tech school. This was before the internet revolution, even before the computer had become a common appliance in most homes. I said something like, "The only way we are going to keep from destroying ourselves on this earth is by establishing an absolutely free flow of information. And without these computers we have been working on, this flow of information will not be possible." I still believe that. No matter how odious censorship may be, one thing is certain: the Chinese people will now have one more tool of information.

This doesn't mean Google should just be given some slack and left alone. Hiding the truth is one thing, as in the now-famous "Tiananmen" search. We still should remain vigilant that Google, as well as Yahoo and any other search engine, does not become collaborators with the any censorial government in creating lies that replace the truth. 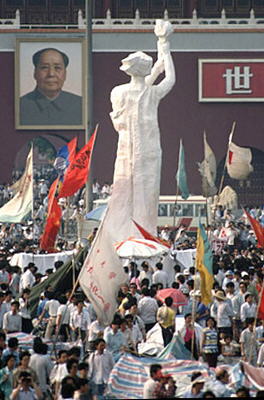 Tags: google, china, yahoo, censorship
Posted by AlanDP at 7:42 AM