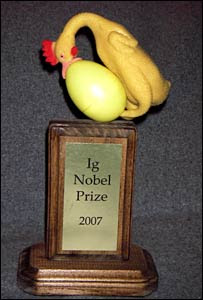 The BBC has a list of this year's Ig Nobel Award winners.

FYI, this award was created by a science humor magazine called The Annals of Improbable Research to "celebrate the unusual, honour the imaginative - and spur people's interest in science, medicine and technology."

Among this year's award-winners are chemist Mayu Yamamoto for developing a method to extract vanilla fragrance and flavoring from cow dung, a team of linguists from the University of Barcelona for showing that rats are unable to tell the difference between a person speaking Japanese backwards and somebody speaking Dutch backwards, and a team of...somethings or others...from the National University of Quilmes, Argentina, for discovering that impotency drugs can help hamsters to recover from jet lag.

Note to the authorized journalists at BBC: AIR is a science humor magazine, not a science magazine. I think there's a big difference.

Full details at AIR.
Posted by AlanDP at 8:03 AM