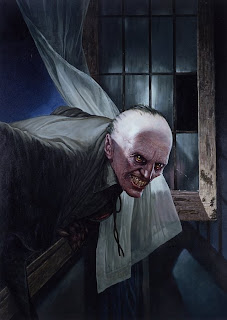 The Croglin Vampire by Les Edwards
When I was around 10 years old I got a book from the Scholastic Book Club that was a collection of spooky stories that I thought was really good. I don't remember the title, and unfortunately I loaned it to someone in years past and never saw it again. I remember specifically only two stories from it. One was a story about a woman who raised her son from the dead so he could continue working to support her. Unfortunately, the lady he was working for fed him some food with salt in it, and it made him return to his grave. I don't even remember the title to that story. But the other story I remember well, and it was titled "The Ghost of Croglin Grange."

The vampire of Croglin Grange is a real tale, that is, it is part of English folklore and not just a story that a writer made up. However, the version I read used the original folktale as its starting point and the writer created a story that was much more fleshed-out, more dramatized, and of course, more like a short story than a simple recounting of a folktale. At the time that I read it, I didn't know it was supposed to be based on a real folktale. I just thought it was another creepy tale. In the version that I read, the young lady who was victimized by the vampire was awakened from her sleep by the sound of something scratching on her window. It was the vampire, scratching with his long, claw-like fingernails.

One night, not long after reading this tale, a norther blew in. It was the first norther of the season, and late that night, a howling black wind came shrieking through the sandhills. The temperature plummeted. I was awakened by the sound of something scratching at my window.

We lived in the country, far away from anyone else, and we didn't have any lights on at night. It was so dark I couldn't see a thing. But still, something scratched at the window. I was almost paralyzed with fear.

Vampires don't exist, I told myself. But something is scratching at the window, I answered myself back. I have to turn on the light.

But I was too scared to move.

I finally reached up and pulled the chain on a small reading lamp that hung on the wall over my bed. But the glow cast by the single bulb only created a glare on the double-paned window, and I couldn't see anything outside. I may as well have been staring at a solid wall.

So with those two sentences chasing themselves around in my head, I worked up the nerve to get out of bed and turn on the big light. I still couldn't see anything. If anything, the glare was even worse and I could see nothing outside the window.

There was no way I was going back to sleep. My heart was still pounding and adrenaline poured through me. I had to know what it was. I'm being stupid, my ten-year-old mind tried to reason, vampires don't exist.

So I walked through the house to the front door and flipped on the porch light. The noise continued. With my heart about to pound itself out through my ears, I opened the door.

There was no vampire.

But there was something scratching at the window.

A large, old oak tree that had extended a limb through the spring and summer had a single twig on the end of one long branch that, in the heavy gusting northern wind, was bouncing back and forth and scratching against my window.

But it was still making too much noise for me to sleep. While I was trying to figure out what to do with it before I starting freezing, my dad finally awakened and came to see what was going on. He found me there, trying to tie a knot in a small tree limb.

"What are you doing?"

"This limb keeps hitting my window and it's keeping me awake."

He shrugged. "Well, don't stay out here too long without a coat."

And that was that. The next morning I got the saw and snipped off the end of the limb so I wouldn't have to hear it scratching at my window again. I never told anyone about my "vampire" scare, but because of this, the tale of the Croglin vampire has always had a special place in my heart.
Posted by AlanDP at 8:51 PM