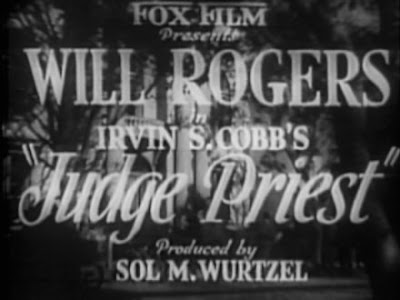 Judge Priest, 1934
Upon first glance at this collection, I had a pretty strong hunch that the vast majority of these movies would be silly old B-westerns that would be good for making fun of and perhaps provide some humorous(?) blog fodder. I also guessed that there would be a few hidden gems in the mix. This is one of those. All the more a gem because it doesn't fit my definition of a "western," and in my opinion doesn't really belong in this collection. But I'm glad it's there. It's not a movie I feel like poking fun at, therefore, I'm going to change my usual plan of totally "spoiling" a movie and try not to give away too much of the story, because this is one you should hunt down and watch.

Irvin S. Cobb wrote a lot of stories (around 70, I read somewhere while researching this) with the Judge Priest character. This movie is not based on any specific story (I don't think), but is based on the overall character that he created, and which was supposedly based on a real judge he knew while growing up in Kentucky.

The movie is set in 1890, in a small Kentucky town where Confederate sympathies were still strong, in a time when many Confederate veterans were still alive. Much of the movie is more like a series of interrelated skits, rather than a single story-line, but they all tie and build together to the final conclusion of the movie.

This movie is more notable, perhaps, for the actors involved than for the story itself. The star is, of course, Will Rogers, but he is so famous that I don't think I can say much about him. 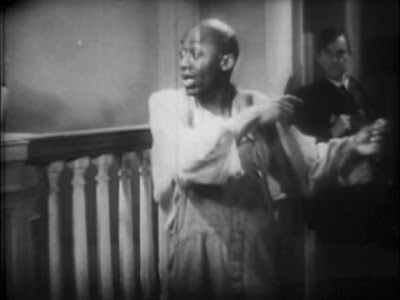 However, I think most notable among all the players was Lincoln Theodore Monroe Andrew Perry, who played the character of Jeff Poindexter and who used the stage name Stepin Fetchit. I recommend simply reading the mini-bio provided at the link. In short, he was condemned early in his life for portraying black characters who were stereotypically lazy and ignorant, but later in life was praised for opening up the world of acting for other African-Americans. In this movie he plays someone who is about to be sentenced to six months hard labor for stealing a chicken--and is so lazy and unconcerned that he goes to sleep during his trial, but is basically rescued by Judge Priest (played by Will Rogers), and they become friends and fishin' buddies--or as near to friends as a Confederate veteran and an ex-slave can get in 1890 Kentucky. He appeared in 54 movies between 1925 and 1976, when he suffered a stroke that ended his acting career. He passed away in 1985. 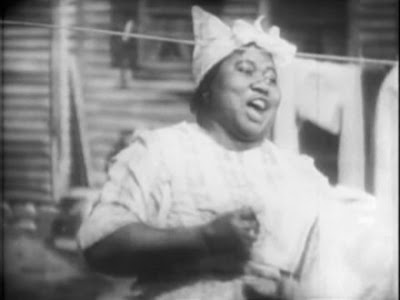 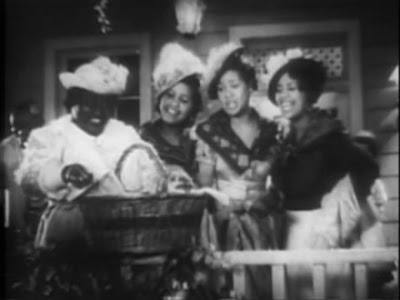 Here she is again singing "My Old Kentucky Home" with the Brown sisters: Melba, Thelma and Vera. I had a hunch they were a real singing trio--and probably sisters--when I saw them in the movie. This is the only movie Melba and Thelma ever appeared in. Vera appeared in one other movie in 1941. I wonder if they ever made any records. 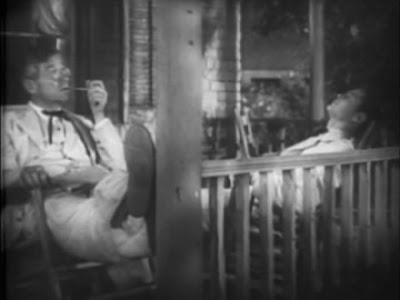 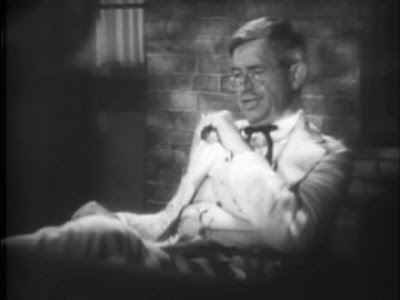 Stunt pipe. Try holding a real pipe like that when you smoke it and see how hot your hand gets. 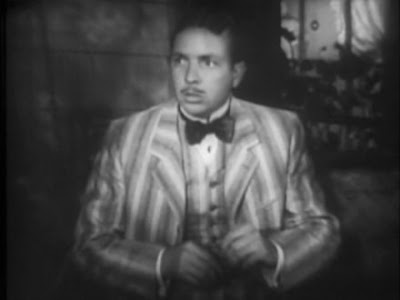 This is Frank Melton, who played the would-be suitor and town barber Flem Talley. Another character actor whose career spanned about 20 years, I mention him now only because, in the character of Flem Talley, he is responsible for the single most heinously obnoxious laugh I have ever heard in my life. Something like a combination of Roscoe P. Coltrane, Arnold Horshack, and the spasmodic cough of an asthmatic coyote. 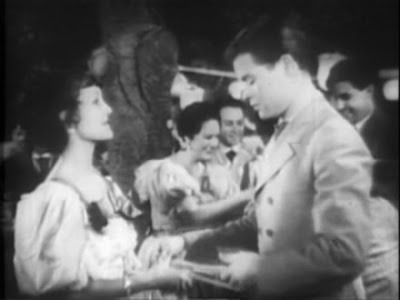 They're pulling taffy. It was a taffy pull. First time I've ever seen an actual taffy pull portrayed anywhere. 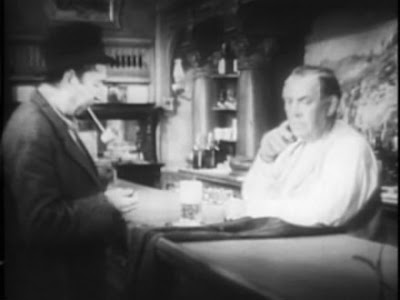 More gratuitous stunt pipe smoking. In fact, I think it's the same pipe. 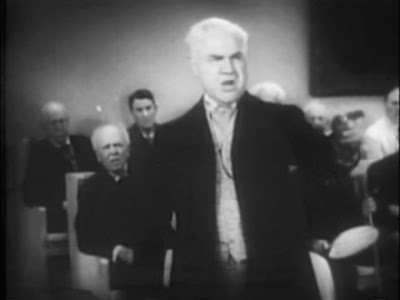 This is Burton Churchill, playing prosecuting attorney Horace Maydew. Yet another long-time character actor who plays it totally straight in this movie even though he managed to sneak in a couple of absolutely gut-busting punch lines. His character is so over-the-top bombastic that you have to see it to believe it. His orotund declamations bring a whole new dimension to the word "histrionics," and forced me to break out a thesaurus just so I could try and give you a tiny glimpse of his outlandish pomposity. During the trial of Jeff Poindexter, Jeff says "I once caught a catfish thiiiiis big," putting his hands about three feet apart. Maydew points at him like the hand of an avenging God and thunders, "Proof that he is a liarrrr!!!" I nearly rolled out of my chair. 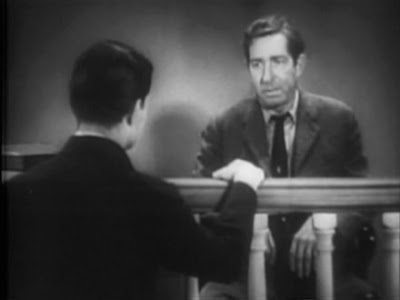 The story really centers around the man in the witness stand, Bob Gillis, played by David Landau. He is another essentially unknown character actor with a ringing deep bass voice who didn't start acting until he was in his 50's, and then managed to pack 33 movies into the last four years of his life. Judge Priest was his last movie. 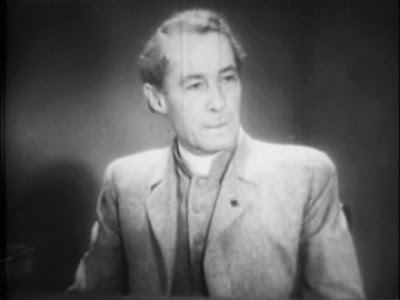 Henry B. Walthall plays Revered Ashby Brand, a Confederate veteran who knows the true identity of Bob Gillis, and takes the stand as a character witness to save Gillis from being wrongfully convicted. Walthall appeared in more than 300 movies between 1910 and 1936. I will not give away any more of the story, but the following picture is a hint. 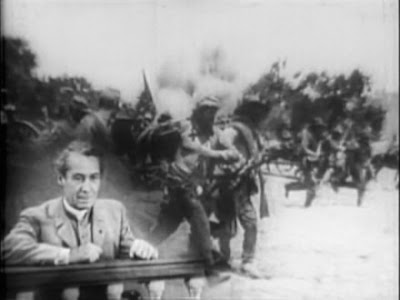 Judge Priest is a movie that, in my opinion, could not be made today. Between the portrayal of blacks in the post-War of Rebellion era and the unapologetic depiction of Confederate veterans as honorable men who fought for what they believed was right, this movie could make those with more delicate politically correct sensibilities faint dead away. It is filled with Rogers' trademark understated and sometimes sideways humor. It will make you laugh, and if you still have any faith in the goodness of man and an idea of what real justice is, the end might give you pause to reflect soberly on the history of our nation.