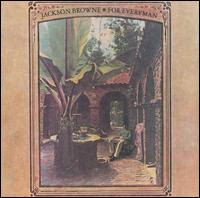 I have a bunch of rips backed up that I need to comment on (need! that is) so I can move them to the music drive. This is one.

An old Jackson Browne album that I bought used and I don't really have a whole lot to say about it. Good to have if you still listen to the old Jackson Browne/Eagles sort of thing, when they were still treading the gray zone between country and rock and hadn't gone totally pop yet.

For Everyman is, perhaps, notable only because it includes Browne's version of "Take it Easy," which became a huge hit for the Eagles but wasn't much of anything for Browne.

I never went out of my way to buy Jackson Browne albums, although I do enjoy most of his music and wouldn't mind hearing it on the radio if a station around here ever played it. Unfortunately our only classic rock station has a very narrow view of what constitutes classic rock and Browne doesn't seem to make the cut. Neither do the Eagles, for that matter, with the exceptions of "Hotel California" and "Life's Been Good," (which wasn't technically an Eagles song, except that they did it on that live album when Joe Walsh was with them).

Ripping results: good enough although not totally perfect. A couple of faint artefacts.

Amazon has sound samples of the whole album, and you can buy the mp3 of "Take it Easy" for 99¢ if you're curious about how it sounds. It's much less polished and less poppish than the Eagles. More of a singer/songwriter-sounding version. The commenters at Amazon seem to be much more enthusiastic about this record than I am, so maybe you should go read what they have to say.

I'm not saying I don't like this album, because I do. It just doesn't thrill me terribly. My favorite of his is Running On Empty, which I ripped from an old cassette some time ago. Maybe I should write about it sometime so no one gets the impression that I'm a Jackson Brown hater or something.