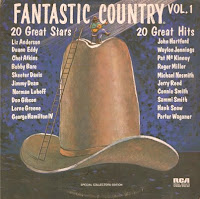 This was an odd collection, and I guess they're all country, but I wouldn't go so far as to call them all "fantastic." Out of the 20 songs on it, I deleted 10 after an initial listen.

So here are the ones I deleted:
Jerry Reed - Amos Moses (because I already have a "best of" CD with this one on it)
Sammi Smith - For the Kids (one of those country songs for which have I no empathy nor sympathy)
Norman Luboff Choir - San Antonio Rose (does anyone really want to listen to a choir singing this song?)
Roger Miller - Hey Little Star (same reason as "Amos Moses")
Waylon Jennings - Lovin' Her Was Easier (nothing against Waylon and nothing against this song...it just sounded rather uninspired and didn't do anything for me)
Porter Waggoner - Carroll County Accident (maybe okay to hear once...or twice...but then meh)
Connie Smith - You Ain't Woman Enough (a Loretta Lynn song...anyone else singing it just seems silly and redundant)
Jimmy Dean - I'll Be a Hero (from the rapper of what is now "classic" country...does nothing for me)
George Hamilton IV - Sunday Mornin' Comin' Down (great song, one of my favorites...this version makes him sound like he's apologizing to his grandmother)
Hank Snow - Honey (one of those country songs that gushes with over-sentimentality...if that's your thing, good for you...it's not for me)

Songs I kept, which may be harder to explain:
Michael Nesmith - Silver Moon (about as country as Nesmith gets, I guess...I've never heard a song of his I didn't like...this one will go on my general favorites list)
Chet Atkins - Yakety Axe (a guitar version of Boots Randolph's "Yakety Sax," fun to listen to)
Liz Anderson - Ode to Billy Joe (I don't know why I'm keeping this one...maybe because I don't have a recording of the original--that I know of so far)
John Hartford - Gentle On My Mind (already one of my favorite songs...now I'm looking forward to hearing more by Hartford...this one will also go on my favorites list)
Duane Eddy - Fireball Mail (country?...I wouldn't go that far, but it's fun to listen to)
Don Gibson - I Love You So Much it Hurts (I have sort of developed a "thing" for Gibson's voice)
Pat McKinney - Gypsies, Tramps and Thieves (which was a big hit for Cher, right?...anyway I've never heard of Pat McKinney but she has an interesting voice...very cigarette & whiskey but she can still belt out a tune)
Bobby Bare - Folsom Prison Blues (I don't think many country singers could pull off covering a Johnny Cash hit, but Bare manages it quite well)
Lorne Greene - Ringo (just for the sheer novelty of it)

Just for the Nesmith and Hartford songs, this was a good score.
Posted by AlanDP at 9:04 PM