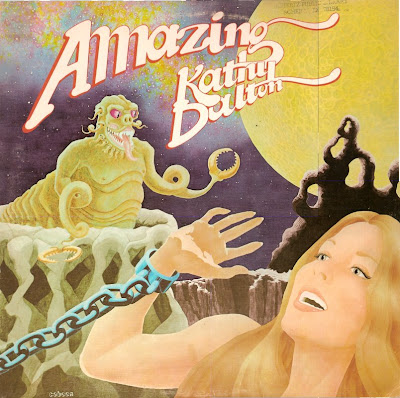 click to enlarge
UPDATE: This post has been bumped back to the top for the videos embedded below and further information.

I had originally grabbed this one for a "weird album covers" post, but I remembered liking it back about 25 years ago so I put off posting until I had finished ripping it. The editing isn't good; a couple of songs have a scratchy sound that I can't get rid of. I really wish someone would re-release a CD of this one. Possibly the most remarkable thing about this cover art is that the album came out a good 10 years before Jabba the Hut took Princess Leia captive.

It's hard to find information about this one. Collectible copies in near-mint condition are going for around $90 in various places on the internet. Pretty much everything I know about it comes from the liner notes on the back jacket. Since the cover art is quite, shall we say, fanciful, here is a photo of the actual Kathy Dalton from the back cover. 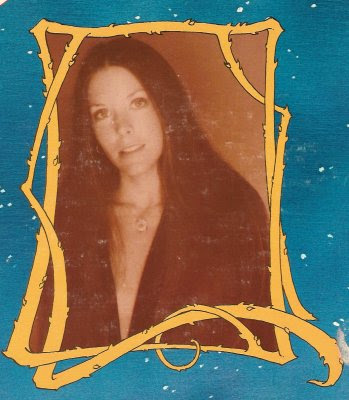 Her main backing band was Little Feat, who you have probably heard of. There were lots of other musicians who contributed to the album, and of them the only one I've heard of is Van Dyke Parks. Parks also has an a album called Tokyo Rose from 1989 on which Dalton contributes vocals. All the songs on Amazing were written by Greg Dempsey, but he's another one who I can't find any real information about, although if you wiki or google his name he turns up in all kinds of places as a song writer. Amazing was later re-released with the title Boogie Bands and One Night Stands with a slightly different track list (I think), but it is no more easily available than Amazing.

UPDATE: Kathy Dalton (then Kathy Yesse) was in an earlier band called Daughters of Albion who released a self-titled album in 1968. Below is one song from it, "Hey, You, Wait, Stay."

Amazing is another album that I picked up at Yesterday's Warehouse, and as you can see if you enlarge the cover art, it belonged at one time to the Schertz Library. (This is not the only album I have with that stamp on the cover). Eleven tracks with a total playing time of around 33 minutes. The songs range from boogie to rock to country. Favorite tracks of mine are "Pour Your Wine" and "I Need You Tonight," but to me the whole album doesn't have any weak spots. One song called "Ride Ride Ride" seemed vaguely familiar to me, so I looked it up and it turns out it was recorded by Lynn Anderson in 1966, so that's probably where I heard it long ago. Never mind, it's not the same song. There seem to be several songs with this title, none of which are this one.

If I ever come across another decent copy of this--LP or CD--that I can afford, I'll buy it.

UPDATE: Embedded below are two tracks from this album. The first, "Ride Ride Ride" is a more up-tempo rocker; the second, "I Need You Tonight" is sort of a countrified power ballad.