Thomas Jefferson and His Dixieland All Stars - If I Could Be With You (LP, 1974) 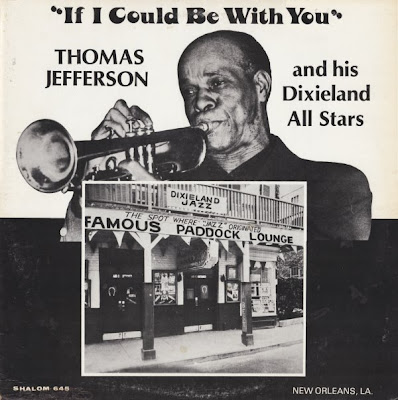 UPDATED to include the track below and a cleaner scan of the cover art.

Not too long ago I wrote about a Dixieland album by Teresa Brewer. Well, here's another one that also came from my late mother-in-law's record collection, and this one is the real thing.

The Brewer album, excellent as it is and I suppose technically authentic in its own right, is somewhat (how shall I say...) whitewashed. Perhaps recorded for the Lawrence Welk set, with a pretty white face to disguise the true origins of the music. 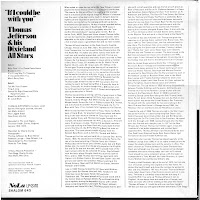 The liner notes for this album are quite extensive and I have tried to provide the whole thing (click the graphic to enlarge), but my stitching was a little off so I apologize for that. I recommend reading them if you want to know all about Thomas Jefferson. His parents were from Louisiana, but they moved to Chicago briefly, where he was born in 1921. Then they moved back to New Orleans where he grew up learning music in church. He showed such great proficiency playing with toy wind instruments that a church friend gave him a bugle which he became very good with. He then began playing a cornet that belonged to a friend of his until his mother saw how good he was and bought him his own cornet for $65 (an astounding sum to spend on a instrument for a boy back then, I'd say). He learned to play gospel music by ear, or by "head" as he called it.

When he was 14 he was sent to a "Home for Waifs" because he got caught skipping school and skinny-dipping, and it was there that he encountered a real music teacher who taught him to play the French horn and the trumpet. He got a part as second trumpet in a real jazz band in 1934, and was fronting his own band by 1935.

Wikipedia has a very brief entry on him, and the liner notes here are exhaustive by comparison. According to their entry, he is still living.

The music on this record is real Dixieland, the gruff vocals somewhat reminiscent of Louis Armstrong, although not quite up to that level. But wow, this is great stuff. Another hidden gem.

The liner notes say this was recorded at a place called The Lord Napier in England. Not a recording studio, I don't think. It sounds like a pub or club or something was emptied out just for the recording. It has a very "live" feel, in fact the song "Blueberry Hill" was recorded in one take according to the notes.

Track list:
Side One
1. Baby Won't You Please Come Home
2. Blueberry Hill
3. It's a Long Way to Tipperary
4. If I Could Be With You
5. Who's Sorry Now

Side Two
1. Tell Me Your Dreams
2. Ting-A-Ling
3. Gonna Sit Right Down and Write Myself a Letter
4. Blues for Jefferson, Jr.
5. St. Louis Blues

Ripping results: I had to give an extra-thorough cleaning to side 1, track 2 because of some gunk causing a skip, but once that I was fixed, I got a perfect rip. No pops or skips.

Here is the title track, which has both his trumpet playing and his singing.

This album is not currently in print, and it probably didn't have a very wide distribution to begin with. I have found only one collection at Amazon that involves him. The link is below. It is available only as an mp3 download and there are samples of all songs on the album that you can click to hear.