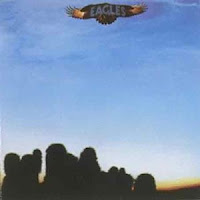 My first Eagles album was their first Greatest Hits on cassette, which immediately became one of my favorite albums. I don't remember if I ever got all of their old albums, but I still want to. My college room-mate had a record of The Long Run, which I listened to and even made a dub tape for myself, but I never cared for it a lot and I don't think I'll bother with it. However I do still have some holes to fill.

Anyhow, this is their first and it includes their three hits "Take it Easy," "Witchy Woman" and "Peaceful Easy Feeling." I like pretty much the whole album but I do think it has a couple of weak points (for example, "Chug All Night" is just one of those silly songs that doesn't do anything for me).

I also have a cassette of One of These Nights which I like a lot and am going to do a partial digital replacement for it. The hits from it are on that first Greatest Hits album, so I already have digital versions of those. The rest I plan on downloading one at a time from Amazon to fill in the full album.* My favorite piece from it is an extended instrumental called "Journey of the Sorcerer." They never did anything else like it as far as I know.

Recently the CD player in my truck started acting up. If I leave it without a CD in it, it keeps trying to eject a CD but since there's not one in it, it just keeps doing it over and over and I can't see the clock display when it does this. So I figured I'd burn a CD and just leave it in there all the time so I can still see the clock. I'm slightly worried now that it might eventually crash completely and leave me with a CD permanently stuck in it, so I'll probably only be using duplicate CDs. So to start with, I burned this album to CD and listened to it once last week. It sounded just fine. I got a perfect rip on this one.


*I just did this with The Doors' Strange Days. Four tracks from it are included on the "Band Favorites" disc from their 4-CD Box Set. I downloaded the remaining tracks from Amazon to fill it out.
Posted by AlanDP at 8:22 PM