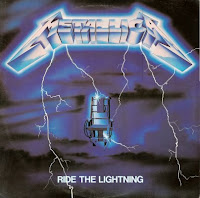 First of all, PERFECT RIP!!!

I've been cleaning up all the stuff I had recorded, doing the easy ones first just to get them done so I won't have so much stuff in progress. I have discovered that having too many in progress at once means I don't ever finish anything. I should have realized this before, since the same thing applies to books, for me, at least.

So this is my only Metallica album, and I guess if you're going to have only one, this is the one to have. Not a single weak spot on it, and it's better now than it was when I bought it new in 1984.

One of my special favorites from this one is "The Call of Ktulu," and not because of the title. I almost always like the metal instrumentals better than the ones with vocals.

Another excellent album from 1984 tomorrow, I think. I don't think there would be much point to say any more about this one. You either like metal or you don't, I suppose, and if you like it you probably already have this one. If you like metal and you don't have it, then what the **** is wrong with you?