It's been a little more than 2 years since we made the tour of all the missions with the kids, and when I wrote that old post I just grabbed some photos that were available on the internet, at that time saying that when I got my own photos developed I could post some better pictures that showed the vastness of the inner grounds of Missions San José. Well, we finally got around to getting 5 rolls of film developed so I now have some photos. It will take me a while to upload these so I'm not going to do it all at once. This won't be new to locals--unless you're a local who has never visited the missions, and if you are, what are you waiting for? Seriously. 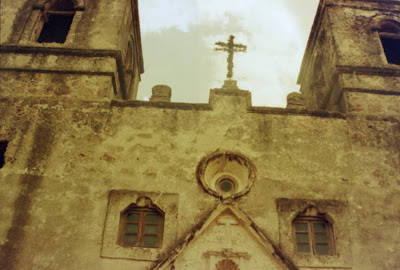 This is the only shot I took at Mission Concepción. It's just the cross overlooking the entrance. 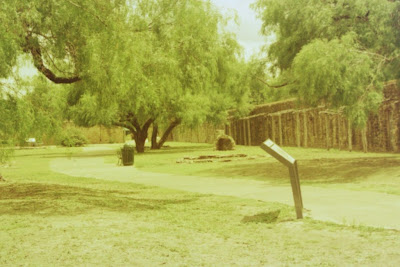 Some of the photos look very yellow, and I don't know enough about photography to know why. I do recall the sky was very overcast that day, and it did rain a couple hours after I took these photos. This is along the east wall, I think, looking back toward the chapel. 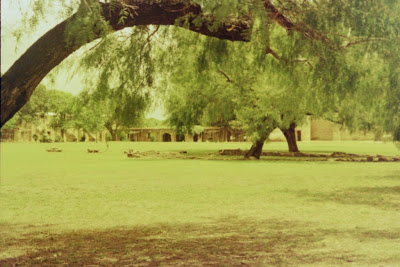 This is from a path along the south wall looking back toward the chapel and other buildings. In the old post linked above I had mentioned how most people had a hard time grasping how big the Alamo grounds were during the famous battle because there's really almost nothing left of it now. This and the following photo might help you to get a better idea of how big the Alamo grounds were. This is from the far southwest corner of the grounds looking back toward all the buildings. This is the same kind of wide open space the Alamo defenders on the walls had at their backs. They had nowhere at all to go once the battle began and the walls were overrun.