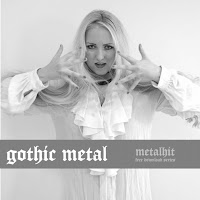 I haven't been downloading as much this year as last year, mostly because I've been spending more time trying to digitize my old records. Anyhow, I've seen others from this series before but skipped them. This one was in the regular email from Amazon several days ago and I decided to download it and see what it was like.

I like it a lot--the lyrics I posted yesterday were from a song in this collection. In my personal ratings system, which, as a reminder, goes roughly from 0 to 3, although higher than 3 is possible but extremely rare, this album gets an overall 2.9.

Generally, in this collection you're going to hear metal that is heavy yet melodic and harmonic (that is, musical), some keyboards (including piano!), and some growled male vocals along with "clean" female vocals. Tempos tend to be slower and lyrics tend toward the dark and doomy, as they should in this kind of music.

One problem with this one, however, is that track #10 is incomplete. It is a sampler collection, after all, but since all the other tracks are complete and this one just abruptly stops at 5:55, it must have just been a goof on someone's part. A commenter at Amazon said that the actual track is about 3 minutes longer.

Twelve tracks, total playing time about an hour. I might also mention that I tried to look up several of these groups on Wikipedia, but of the ones I looked for none of them were included there. However, the Encyclopaedia Metallum has proven most helpful in filling in more information on these groups.