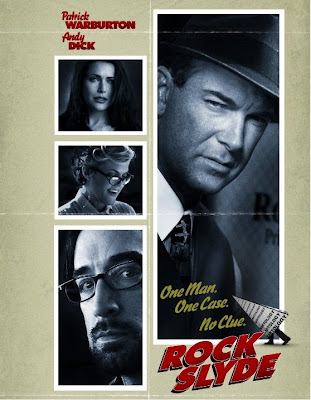 I've been a fan of Patrick Warburton for quite some time--I guess I would have to put him close to the top of my list of favorite character actors as well as voice actors. I have found recently that he keeps turning up in unexpected places--the voice of the Wolf on Hoodwinked, which I and the kids saw recently and was quite funny, especially the parts including the Wolf; and the voice of the sheriff on the newest incarnation of Scooby Doo, to name two. Of course he's the voice of Brock Samson on The Venture Brothers, which is probably my favorite animated series at the moment. I was first introduced to him as Elaine's weird boyfriend on Seinfeld, who always wore that huge furry coat. But I've never seen him in a leading role. So I was pleasantly surprised when I came across a movie (I think it was on The Movie Channel) starring him, called Rock Slyde.

Rock Slyde is a comedy that spoofs both hard-boiled detective stories and villain-who-wants-to-take-over-the-world stories. Other major characters are played by Andy Dick (the villain), Elaine Hendrix (Slyde's secretary), and the beautiful Rena Sofer (Slyde's client). The rest of the cast is made up of many people who could, and have, starred in their own shows & movies but who play relatively small parts in this movie, which is unusual. For example, Jason Alexander plays a small part as a mailman. All three of the aforementioned supporting actors have appeared in lots of places and I'm sure you know them well.*

Andy Dick plays the leader of a weird pseudo-religious cult known as Bartology (which in itself is a spoof of Scientology), because his first name is Bart, although all his followers refer to him as "the blessed guru." However, instead of wanting to rule the entire world, Bart wants only to occupy one whole office building. The only one who stands in his way is Rock Slyde, who refuses to give up his office. Slyde has a shameful secret from his past, in that when he was younger and desperate for money he appeared in a gay pr0n musical called The Jolly Roger. Bart uses this information to attempt to blackmail Slyde. Slyde's skills as a detective remain in some doubt; he has a reputation as a poor detective and often makes stupid mistakes, however he has certain genius-level abilities such as being able to identify the make of a car, the key from which was used to key his own car, by simply looking at the shape of the scratch.

The humor is not over-the-top. I don't know if I'd go so far as to call it "subtle" but it doesn't usually (usually, I repeat) hit you over the head. I did laugh out loud several times, and I would recommend catching it sometime if you can. I think it's worth spending 90 minutes on.

*By the way, the first time I saw Rena Sofer, she appeared in a short-lived Sci-Fi series called The Chronicle which I enjoyed quite a lot. Unfortunately it seems this series has never been released to DVD; Netflix isn't even aware of its existence.
Posted by AlanDP at 2:41 PM