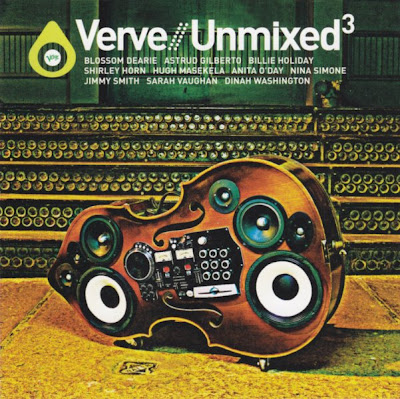 Just got this from yourmusic.com yesterday. Apparently, Verve had put out a collection called Verve Remixed 3--part of a series in which jazz classics "were remixed by today's finest DJs." I am so totally uninterested in any such thing that I can't accurately say I have "zero" interest. My interest in it would be something more like negative 15. Anyway, they followed it up with this collection of the original untampered-with recordings which did interest me. It's basically a jazz sampler, mostly vocal, mostly female artists. Included are Nina Simone, Billie Holiday, Anita O'Day, Sarah Vaughan, Shirley Horn, Blossom Dearie (who I hadn't previously heard of), Astrud Gilberto (who you probably know as the woman who sang "The Girl from Ipanema"), Jimmy Smith (instrumental), Hugh Masekela (instrumental, mostly) and Dinah Washington.

Pretty good collection, and it doesn't duplicate anything I already had except for the Jimmy Smith track. The Dinah Washington track is from her more jazzy stuff--not the kind of thing that could be considered pop by any means. "Little Girl Blue" by Nina Simone has a very strange and poignant juxtaposition of melodies--the piano is playing "Good King Wenceslas" but she's singing a completely different tune.

So...a good addition for the collection.
Posted by AlanDP at 2:47 PM