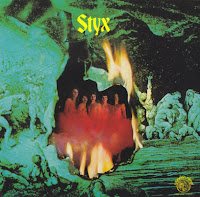 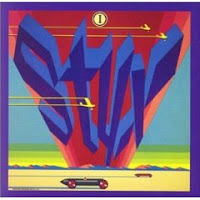 Their first eponymous album, original release on the left (1972), the RCA reprint from 1980 on the right.
On the left we have the five members of the group, nude and exposed, apparently stoically glaring out from the fires of Hell. On the right we have old-timey racing cars zipping across a salt flat or something with airplanes flying overhead. I think this style is called art deco. Right? Anyway... 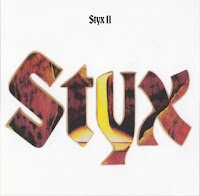 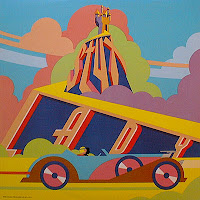 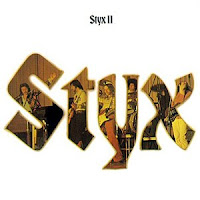 On the top left and bottom are two different versions of the original cover of Styx II from 1973. The top left is the one that came with the CD set, the bottom one was found on the internet. I think the one on the bottom is actually correct. I like it better anyway. The group in the act of performing as seen through cut-out letters of their group name. At top right we have another art deco old-timey roadster with a couple in it (I think) and a castle(?) in the background. Also they changed the name of the reprint to Lady because, after all, that's the only thing on this album anyone has ever heard of. (Hate not, Styx fans! I'm being sarcastic. Mostly). 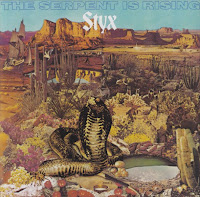 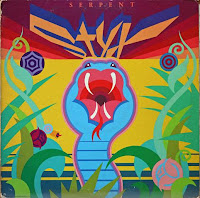 Cool album art here. Click to enlarge. On the left, from 1973: a desert oasis with a giant cobra right in the foreground sitting next to some shrooms, a herd of llamas or possibly alpacas (hard to tell) behind that with...a goat? Okay, and then there's a white bat flying in front of that big saguaro, the really cool image of a wrecked sailing ship in the desert and I think some dude is riding a camel behind that back lake. In the far distance appears some kind of lost city, possibly El Dorado? On the right we have a cute and cuddly art deco snake with fangs so adorable you just want to eat him all up. Also some flowers. This one was retitled Serpent because...well, I don't know why. 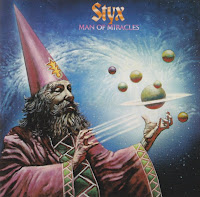 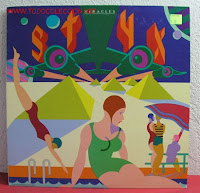 From 1974, on the left we have a fairly self-explanatory image of a wizard apparently manipulating the solar system with nothing but wizardry and his bare hands. Nice. On the right we have some art deco old-timey gals (or possibly dames) with great gams hanging out by a swimming pool in front of some pyramids while a decidedly not old-timey jet airplane blasts by just overhead. I don't know. Also this one was retitled Miracles, probably for the same reason the previous one was changed to a one-word title.

I should note that finding all these images of the reprint covers was not easy. I found the original Styx album easily enough, but the other three required some digging beyond merely just looking them up on Google Images. I didn't want to go to the trouble of scanning them. It's like nobody wants to admit they exist. Somebody has the Serpent reprint on Amazon for $29 used, which seems crazy to me. Conversely, somebody else has the Miracles reprint on Amazon for $4.

Anyhow, I know for sure the originals are out of print, and I'm pretty sure the reprints are also now out of print. So there you go.
Posted by AlanDP at 8:04 PM