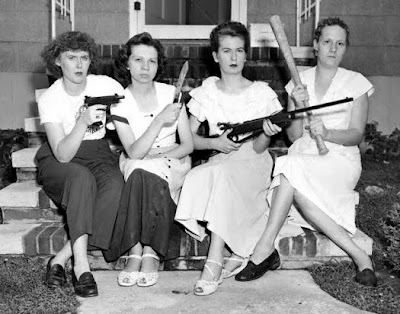 I found this at If Charlie Parker was a Gunslinger. Click to enlarge. Caption below:

Packing Mamas Round Up Marauders.

An interesting note from the caption: this was in a suburb of Washington, D.C. But I see something interesting in this photograph. What you do notice about the way they have posed?

I'll add my own observation in a day or two. Leave your guess in the comments.

UPDATE: Answer in comments.
Posted by AlanDP at 8:23 PM