From 23 Creative Ways To Use Obsolete Technologies at Cracked.com. 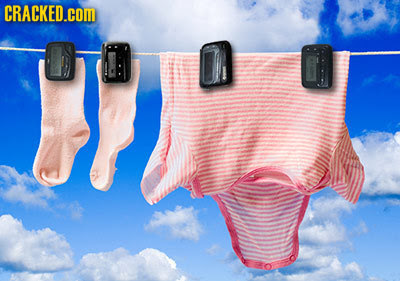 This struck me as quite funny, I guess because I used to be a pager repair tech. Especially because the third from left is a Motorola Elite. Motorola pagers pretty much peaked with the numeric-only Bravo Plus; after that they progressively got fancier, more sophisticated, less reliable and just plain suckier with every model. I think the Elite was the last alphanumeric one-way (that is, receive only) pager they made, and sucked more than any of the others. The picture is misleading, though, because the Elite didn't have a built-in belt clip. They all came with a clip sheath, which is all you would need to hang up your clothes with.

The other three look vaguely familiar, like I probably saw them but never worked on them. Numbers 2 and 4 especially seem to have the stink of Panasonic or possibly Uniden on them. Man I hated working on those brands of pagers.