Well, if you hadn't heard of it yet, one of the local TV stations released all of my employing company's payroll information. Because they can, I guess. I think the biggest shocker for outsiders is that very few of us are overpaid. I don't suppose this will help anyone to learn that their water bills are high because they waste so much water by dumping it out on the ground (which most people refer to as "watering the lawn"). I can almost guarantee this is going to cause more internal problems than external. I have already looked over the spreadsheets myself and was amused more often than aggrieved. For example, I checked two people who I know were hired on the same day. Person #1 has applied himself well, doing his job better than almost everyone else in the department (by the way, this person is not me), and doing what was required of him. Person #2 (not me, either), has spent his entire time complaining about every little thing he could and at times simply refusing to do what he was hired to do. In a normal company, this would of course get you fired, but with my employer it's almost impossible to get fired, so he's still there. Person #1 got regular merit increases and eventually transferred to another department and now makes a couple thousand per year more than I do. Person #2 is still making basically the same amount at which he was hired. I got a big kick out of learning this.

In my wildest fantasies, I see some bigwig looking at this information and saying, "why didn't Person #2 ever get any raises?" and being told, "because he's a worthless f***off" and replying, "then why hasn't his sorry a** been fired?" That's only a fantasy, though. It won't happen.

Here's a mascot (a friendly stray dog) from Thursday. He followed me around for about half an hour down in the godforsaken bottom end of the Old Sky Harbor area. 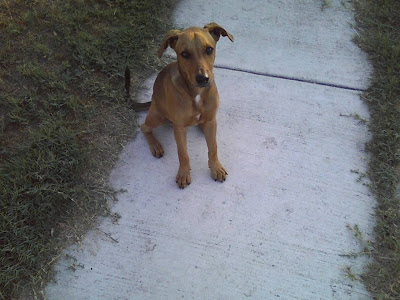 My daughter has a history assignment in which she has to have her photo taken while standing next to at least 5 historical markers in our home county, and create a poster board with the photos and textual information regarding them. I took her photos with a regular (film) camera because it's just a lot easier to have it developed than to try and print decent digital pix, but I also took a few digital photos so she could begin writing up the text part of her assignment.

Here's the big marker in Sutherland Springs. If you click to enlarge you can probably read it all. By the way, the 1998 flood was worse than the 1913 flood, as far as water volume. It didn't result in as much property damage, nor cause any deaths (here), but as far as sheer volume of water, it was worse. 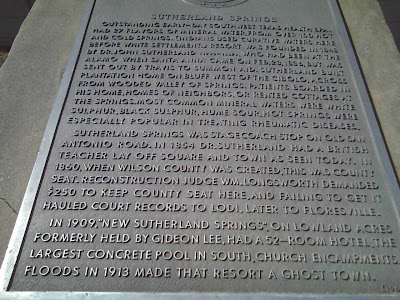 Here's one I didn't know about until just recently when my dad told me about it. Unfortunately I couldn't get any closer so my digital photo isn't readable, but this is an old homestead site that is still private property. The buildings you can see are both original, except for the a/c window unit on the house, I guess. 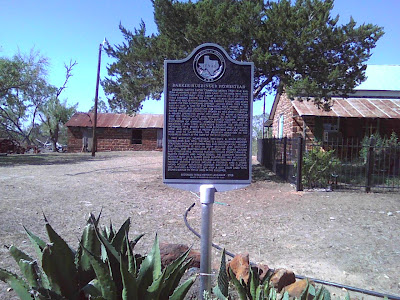 The first three shown here are all within just a few miles of my house. There was one other but I took close-up shots of it so we could read the photos and they don't look good enough to bother posting here (it's for an old oil field). This is the Polley family Cemetery, not far from what everyone now calls "the Polley mansion," but which its original owner called Whitehall. You can read this one easily. 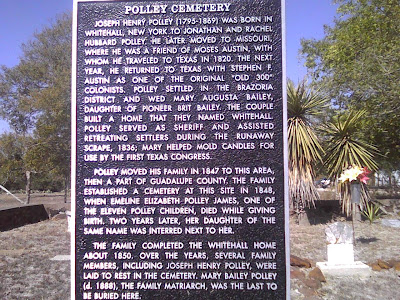 This last one is several miles from my home but which I have family connections with. There were actually two markers here, but unfortunately I forgot to take a shot of the second, smaller marker, although we did get a film photo of it with my daughter. The cut-off part at the top says "Marcelina Community." I lived near here from the time I was about 4 to 6 years old. Those objects at the far top left are tombstones; there is a cemetery there also which as I mentioned has its own marker that I neglected to capture digitally. I have several relatives buried there, including my great-grandmother, whose grave is now lost and unknown. However, I showed the kids the approximate location of where about it's supposed to be according to my dad. She died when he was a little kid, and before a permanent marker could be erected over it, a tornado blew through that destroyed/displaced many of the small temporary markers they used back then. And of course, back then they didn't keep blueprints of the grave layouts, either. I also showed the kids where many of their relatives are buried; the last time I was there before today was for my great-uncle's funeral in 1992. 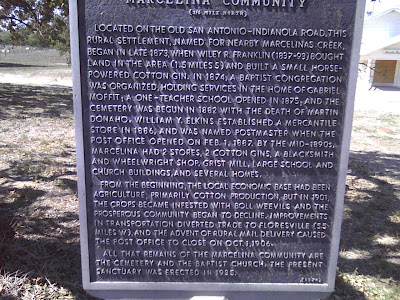 And finally I would like to direct your attention to a cool slideshow of Lovecraftian images assembled by my friend Babel, to the music of Shriekback's "Coelecanth."